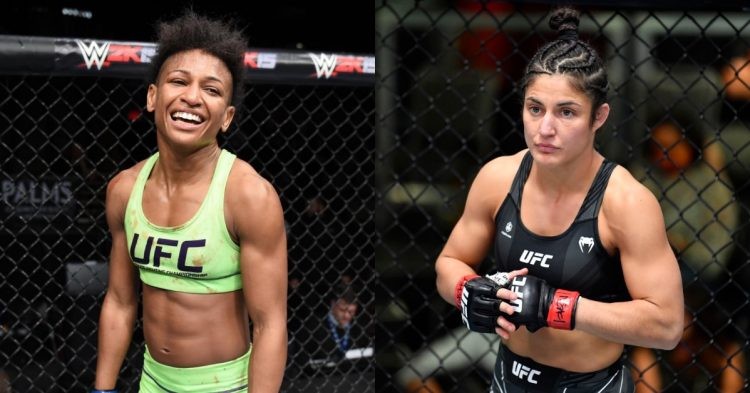 UFC San Diego will go down this weekend inside the Pechanga Arena. It will feature 13 fights in total and one of those is Angela Hill vs Lupita Godinez. The bout will take place in the prelims of the event at a catchweight. Because neither will fight at their natural weight, it will be an interesting contest to witness.

Angela Hill was one of the most talked-about fighters in the UFC for a brief period of time. She used to fight at a regular interval. Although Hill did not necessarily win all of them, her fights were very entertaining to watch regardless. At the moment, she is on a 3 fight-losing streak.

Lupita Godinez was undefeated during her arrival in the UFC. She is the former LFA and BTC strawweight champion. Hence, the expectations were high for her to become a force in the 115lbs division of the UFC. But, she lost her debut fight against Jessica Penne in 2021. However, she is currently on a 2-fight win streak with victories over Loma Lookboonmee and Ariane Carnelossi.

The former Invicta Strawweight Champion, Angela Hill has not had the best run in the UFC so far. She, during her 17 outings inside the Octagon, has lost 10 times while winning only 7. But she never gives up easily and possesses very good striking skills. She has only been stopped twice in her career and both of those were via submission.

Hill lands 5.34 strikes per minute inside the Octagon with an accuracy rate of 49%. Although she has a striking defence of 63%, Hill still absorbs 4.92 strikes per minute. So it shows that Hill likes to engage with her opponent on the feet, much more than on the ground. However, she also averages 0.59 takedowns per fight and attempts 0.1 submissions on average.

Godinez, on the other hand, lands only 2.23 strikes per minute while absorbing 1.73 strikes in the same period. So Hill can definitely take advantage of it during their bout on Saturday. But she might struggle against Godinez’s grappling. Godinez averages 5.37 takedowns per fight and attempts 0.9 submissions. So it remains to be seen how well Angela deals with the takedowns.

If the recent record is any indication, then fans can expect to see the bout going the full distance. Despite possessing such high grappling numbers, Lupita has only submitted one opponent in her career. Hill, on the other hand, hasn’t stopped an opponent since 2020. It proves that neither will pursue a finish in the fight. But Godinez will certainly have the advantage due to her infinitely better-striking stats.