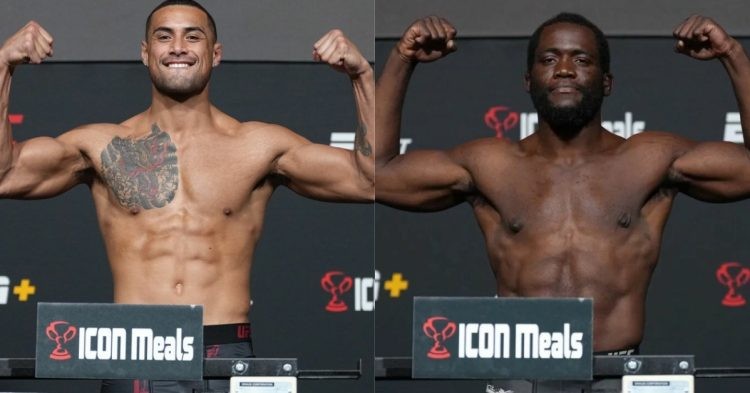 UFC Fight Night: Tsarukayan vs Gamrot is all set to go down this weekend on June 25th at the Apex in Las Vegas. After a mind-boggling fight night event that consisted of 11 finishes last weekend, the promotion has lined up yet another exciting matchup on the card.

One fight that has high potential to grab the spotlight and keep the fans on the edge of their seats would be the preliminary bout between Carlos Ulberg and Tafon Nchukwi. These two light heavyweights will clash in a three-round bout and will headline the UFC Vegas 57 prelims card.

Ulberg who is the middleweight champion Israel Adesanya’s teammate bounced back from his debut loss and picked up a lopsided unanimous decision win over Cherant in his last bout. On the other hand, Tafon suffered a brutal KO/TKO loss against Murazakanov in his previous fight.

Before breaking down this matchup, let’s compare the stats of these two light heavyweights that will step inside the octagon and square off against each other.

Both Carlos Ulberg and Tafon Nchukwi had a great start in their DWCS as they knocked out their opposition and earned a UFC contract. However, the Cameroonian fighter has not been able to win consistently as he has lost two of his four fights so far. Regardless of his recent form, Nchukwi would try to get a solid win over rising prospect Carlos Ulberg.

Speaking about this matchup, fight fans can expect a brutal three-round striking war as these two light heavyweights like to stand and bang and tend to land high output of strikes. However, going into this clash, the Kiwi fighter has a four-inch height advantage over Tafon which could prove significant throughout three rounds.

Moreover, Carlos is quick on his feet and his gameplan in the initial moments of the bout would be to land his trademark leg kicks and attack from a distance. Besides, he has a better all-round game than Tafon as the latter relies on his power a bit too much and exposes him while striking. Although just like Ulberg, Tafon has powerful leg kicks in his arsenal.

But if the Kiwi light heavyweight manages to escape the Cameroonian’s big bombs and stick to his strengths then he has the tools to out-strike Tafon and get his hands raised by the referee at UFC Vegas 57.