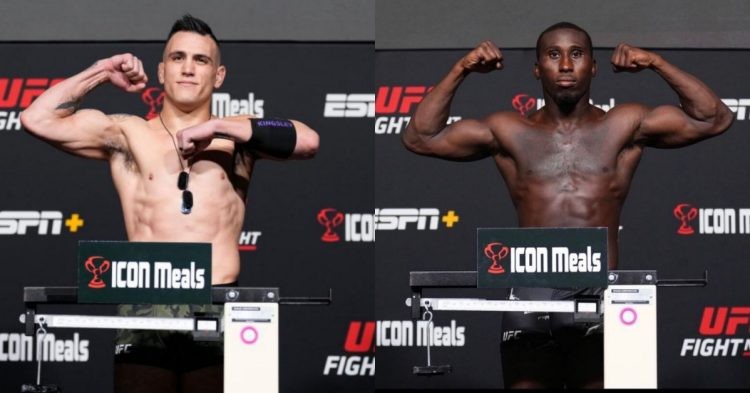 The Ultimate Fighter season 28 alumni Tresean Gore is back in action this weekend. He has not fought in the UFC since losing to the TUF 28 winner Bryan Battle in February of this year. Although they were supposed to face each other in the finale, Gore had to withdraw from the fight in light of an injury.

He will face Cody Brundage in the prelims of this Saturday’s UFC Vegas 58. Although Gore was originally set to take on Josh Fremd, the bout ultimately got cancelled as Josh pulled out. But Cody is no slouch and is much more experienced than Gore. Hence, it is going to be a big test for the 28-year-old.

Cody Brundage had the chance to fight for the UFC in 2020. But his loss stoppage loss to William Knight derailed his momentum. However, a win against Joseph Kropschot in LFA earned him the opportunity to fight in the UFC. After a unanimous decision loss to Nick Maximov on his debut, Cody made a strong comeback and submitted Dalcha Lungiambula earlier this year.

Who is best equipped between Cody Brundage and Tresean Gore to come out with a victory at the event? Let’s take a took their stats and breakdown down how the fight may play out.

Fighting out of Colorado, Cody Brundage has a record of 7-2 in his pro MMA career. What stands out the most is his finishing rate. Out of his 7 wins, Cody has 6 finishes with 3 knockouts and 3 submissions. The 28-year-old lands at a rate of 2.42 strikes per minute with an accuracy of 60%. Cody also has a takedown average of 1.42 per fight.

In comparison, Tresean Gore secures 2 takedowns per fight and has an accuracy rate of 66%. But he can be found lacking in the striking department with a landing average of 3.80 and an absorption rate of 7.47 strikes per 60 seconds. It will be a big concern ahead of going up against a powerful striker like Brundage.

But Gore is by far the more active fighter. Cody was taken down 4 times vs Nick Maximov. Hence, Gore will look to implement a similar strategy in the fight. If Cody can’t piece Tresean up from a distance, Gore will take the fight to the ground and will most likely pick up a unanimous decision victory.