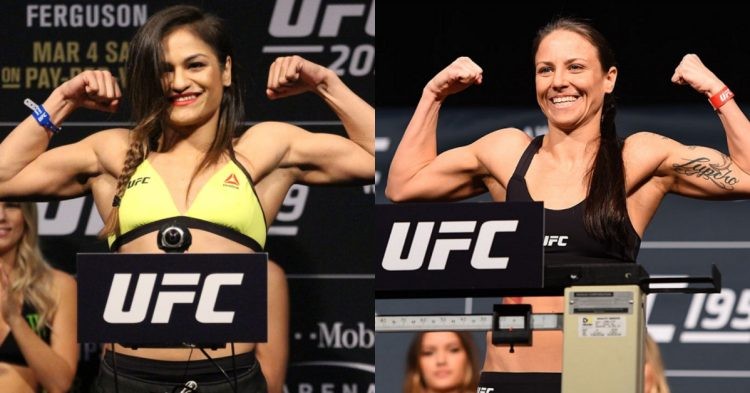 Dominick Cruz and Marlon Vera will duke it out in the main event of this weekend’s UFC Fight Night. It will also feature many other great fights on the card and one such fight is Cynthia Calvillo vs Nina Nunes.

The fight is set to go down in the flyweight division of the UFC and it will take place in the prelims. Calvillo is currently on a 3-fight losing streak as she lost to Katlyn Chookagian, Jéssica Andrade and Andrea Lee consecutively. Nunes, on the other hand, is coming back after a long layoff. She lost to Tatiana Suarez and Mackenzie Dern in her last two fights.

Nina Nunes is currently 36 and just become a mother. So, it remains to be seen whether she can go back to the heights of beating the likes of Claudia Gadelha or not. Cynthia Calvillo is no spring chicken either. She is also 35 years of age and has come a long way since her 4-fight unbeaten run in 2020. Hence, the question is, how will Nina Nunes and Cynthia Calvillo match up? Let’s find out.

Nina Nunes currently has a record of 4-4 in the UFC. However, her last two losses came against opponents who are considered to be elite in the division. Nina holds 4 wins via knockout and 2 wins via submissions in her career so far. She lands 4.64 strikes per minute and absorbs 3.50 strikes at the same time. Nunes also averages 0.28 takedowns with an accuracy rate of 40%.

Cynthia Calvillo also has a decent average of striking. She lands 4.27 strikes per minute. But she also absorbs 4.10 strikes in the same period. But her takedown average is much better than Nina Nunes’. Calvillo lands 1.75 takedowns per fight with an accuracy rate of 43%. So Cynthia’s game plan will be clear against Nina.

Nina will definitely look to keep the fight on her feet. She possesses more power behind her punches than Calvillo. But her 76% takedown defence will definitely be tested against Calvillo. Cynthia lost both of her last 2 fights via KO/TKO. Hence she will look for takedowns right away. But a few decent shots from Nina may end the fight soon.

Hence, Nina Nunes will be the favourite to win over Cynthia Calvillo at UFC San Diego this weekend.