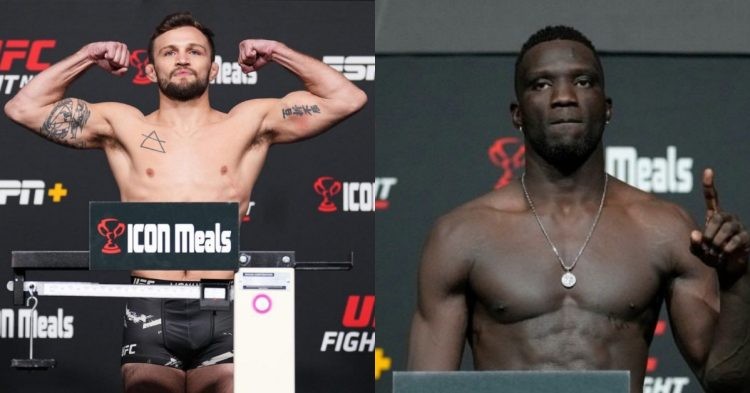 Unranked fighters David Onama and Garrett Armfield will fight at this weekend’s UFC Fight Night event. The featherweight fight between Onama and Armfield will take place in the prelims of UFC Vegas 58. The event will feature Rafael Dos Anjos vs Rafael Fiziev in the headlining spot.

David was originally supposed to fight Austin Lingo. But after the cancellation of the fight, Garrett Armfield stepped in on the short notice.

Ahead of his UFC debut, David Onama was an unbeaten prospect. He was on an 8 fight win streak before fighting Mason Jones. But unfortunately for Onama, his win streak ended with a unanimous decision loss against Jones. However, the 28-year-old did manage to maintain his 100% finishing rate as he knocked out Gabriel Benítez in the following contest.

Fighting out of Florida, Garrett Armfield will be making his UFC debut with this fight. He has fought in the promotions like Shamrock FC, CFFC and LFA. Garrett’s last loss came last year in April. However, he has fought 3 times since then and defeated all of his opponents.

Garrett Armfield has a decent record of 8 wins and 2 losses. But he is a great finisher and always on the hunt for an opportunity to finish the fight. The 25-year-old youngster has knocked out 5 of his opponents so far. Most of his finishes came in the first 2 rounds themselves. He even won the vacant FAC championship in his last fight against Steven Graham.

David Onama on the other hand is an aggressive striker. His average of 6.49 strikes per minute shows the perfect evidence of it. As mentioned above, he has a finishing rate of 100%. But not all of those were knockouts, Onama has 6 KOs and 3 submissions under his belt.

He will definitely be the favourite to win against Garrett Armfield. Not only from a skillset point of view, but he is also the bigger fighter. Armfield has never fought in the featherweight division. The odds are stacked against him and it will not be surprising to see Onama continuing to maintain his 100% finishing rate.