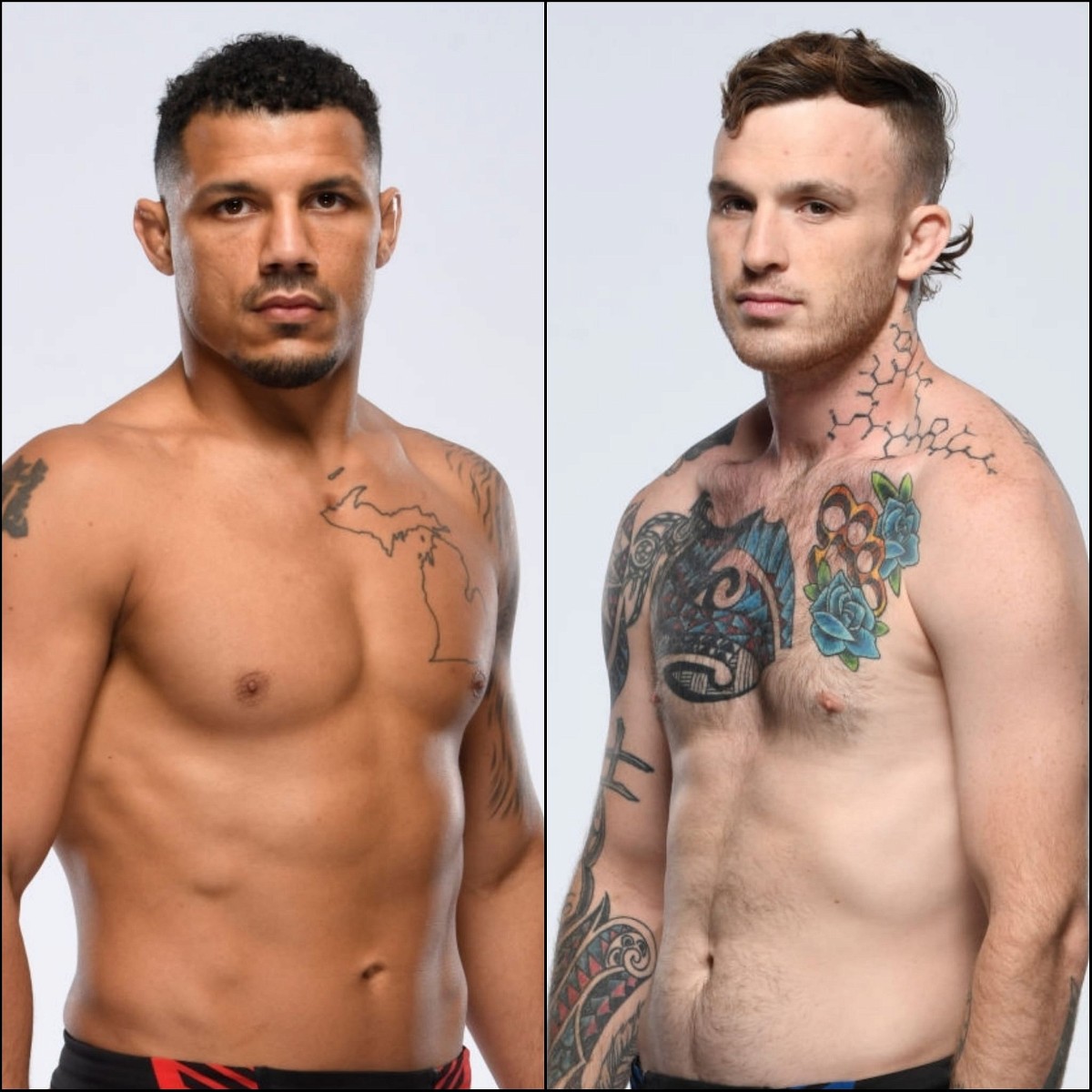 Drakkar Klose vs. Brandon Jenkins at UFC on ESPN 34

Drakkar Klose (11-2-1) will enter the Octagon after more than two years since a series of his opponents pulling out and other unlucky circumstances.

He barreled his way into securing wins in five of his first six Octagon appearances, including upset decisions over Marc Diakiese and Lando Vannata. This led to a clash with Beneil Dariush, who knocked Klose out with a wild left hand in one of the biggest fights of 2020.

Brandon Jenkins (15-8) kept the hype going after knocking out Jacob Kilburn with a flying knee, extending his winning streak to three in the process. Three weeks later, he showed up on short notice to face Rongzhu but later succumbed to vicious ground-and-pound in the third round.

The stakes are pretty big for both fighters in this UFC Lightweight matchup. Both Klose and Jenkins are coming off defeats, so both will be eager to end their losing streak.

Drakkar Klose will enter the bout with huge odds of -685 against Jenkins. Since UFC 248 in March 2020, he’s had several opponents pull out and later suffered a severe injury from a push he received from Jeremy Stephens. However, he has put all of that behind him and will face an opponent he believes he has sparred with in the past.

Klose is looking to secure a win after a loss at the hands of Beneil Dariush at UFC 248: Adesanya vs. Romero. He has a 37% finish rate, including 4 by knockout, and 7 by decision. Klose only has two losses on the record with one of them being against the current #4 ranked Lightweight.

That said, he has not fought in a long time but will go against a crazy man with a scary mindset. He had a pretty upsetting series of skids since his last appearance. Drakkar was scheduled to fight Jai Herbert in February 2021 but one of his cornermen tested positive for COVID and the incident with Jeremy Stephens at the face-off.

Brandon Jenkins is looking to get back to winning ways after a loss at the hands of Zhu Rong at UFC Fight Night: Smith vs. Spann. Jenkins has an 87% finish rate, including 10 by knockout, 3 by submission, and 2 by decision. He has been more active fighting seven times since Klose fought to go 4-3.

He collected three of those wins on his way to his UFC debut including a brilliant flying knee knockout over Jacob Kilburn (2021) for the PFL. However, the debut did not go to plan to fall on the wrong side of a knockout courtesy of Zhu Rong in 2021.

Klose is the better fighter with more experience, technically sound striking, grappling, and impressive cardio. However, he will need to shake off the ring rust quickly as Jenkins will aggressively start off to hunt a finish with his flashy attacks, spinning elbows, and flying knees.

Jenkins can certainly succeed if Klose is rusty, but Klose is too good to make any mistakes and he may not make it look pretty resorting to his grappling, but he should get the job done. Without a strong technical base to support his more outlandish techniques, Jenkins basically needs to catch Klose off guard if he wants to win this fight.

I think Klose out-classes the sporadically dangerous Jenkins in every aspect. He’s got sharp techniques, sound grappling, and vicious ground-and-pound. While the ring rust might make him start the fight a little slow, I believe, he’s free to rough Jenkins up on the feet or just maul him on the ground the way Rongzhu did to secure an early win.