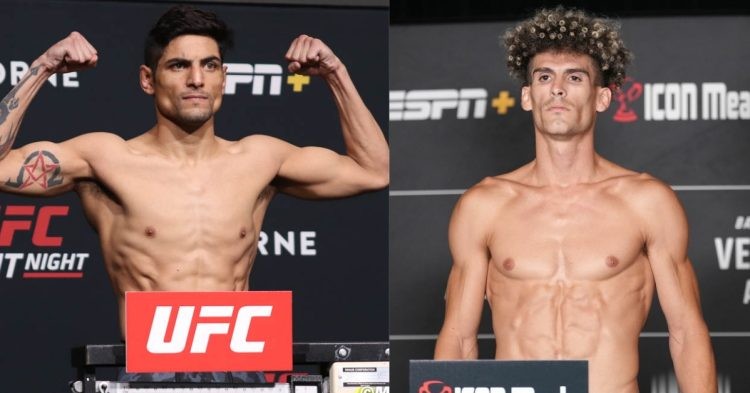 UFC Fight Night: Vera vs Cruz will begin with its proceedings on August 13th at the Pechanga arena in San Diego, California. Just like every other UFC event, there are several exciting fights on this card that will keep the audiences glued to their screens.

One such fight is the preliminary matchup between Gabriel Benitez and Charlie Ontiveros which is scheduled for three rounds and will take place in the 155-pound category. Currently, both the lightweight fighters are going through a torrid time in the UFC. Owing to the fact that Benitez has won only once in his last five fights.

On the other hand, Charlie Ontiveros is yet to register his first win in the UFC after losing to Kevin Holland and Steve Garcia in his first two fights. It is needless to say that is a must-win fight for both the fighters given their poor record and bad performances in the previous fights.

As we move ahead let’s compare the stats of the two lightweights that will square off against each other inside the UFC octagon.

Gabriel Benitez who made his UFC debut in 2014 has been unable to create a significant impact with his performances in the UFC. The 34-year-old lightweight veteran has fought 12 times and has achieved a record of 6-6. He has not delivered to his full potential and has suffered back-to-back knockout losses.

With that being said, this matchup at UFC Fight Night against Charlie Ontiveros could well be his last fight if he fails to beat Ontiveros. Going into this fight, Charlie has a significant physical advantage over Benitez. The American Badboy has a six-inch height and three-inch reach advantage which could help him gain an edge in this matchup.

Taking a look at their styles, Gabriel Benitez is a very aggressive striker who has great knockout power. Moggly likes to attack the opponent with his leg kicks and one can expect him to push the pace from the first minute and go for the kill against Ontiveros. Because Charlie Ontiveros is not durable and has been knocked out eight times in his MMA career.

The only way for American Badboy to win is to strike from a safe distance and outclass Benitez. However, it is easier said than done as Gabriel is a much better striker with higher striking output and accuracy than Ontiveros. So one can expect Moggly to get his hands raised by the referee at UFC Fight Night: Vera vs Cruz.