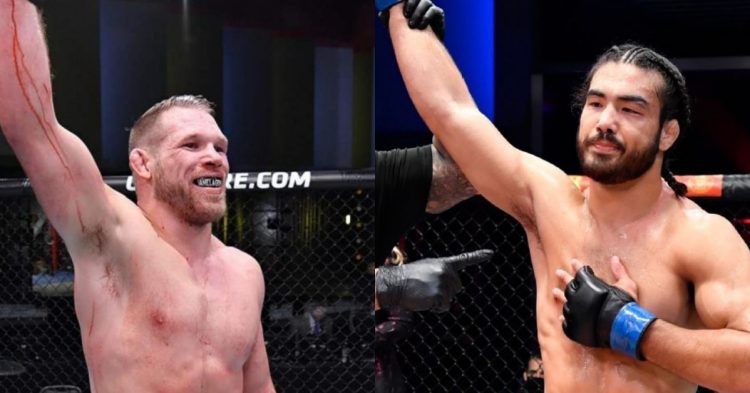 UFC San Diego will feature Jason Witt vs Josh Quinlan in the prelims. The bout will take place at a catchweight of 180lbs. Witt is coming off a loss against Philip Rowe in his last fight, while Quinlan will be making his main roster debut after fighting Logan Urban in Dana White‘s Contender Series.

Josh Quinlan is an undefeated fighter out of Nevada. He trains at Milestone Martial Arts and has a 100% finishing rate in his career so far. He had 3 fights in LFA before fighting in DWCS in September of last year. Josh defeated Pete Keepers, Joe Boerschig and Dallas Jennings in LFA before his big jump to the UFC.

Jason Witt, on the other hand, has a record of 2-3 in the UFC. Although he has wins over Cole Williams and Bryan Barberena, Witt lost to Takashi Sato, Matthew Semelsberger and Philip Rowe. However, he held the KC Fighting Alliance welterweight belt in 2015. Witt also had brief stints at LFA and Bellator.

Nicknamed ‘The Vanilla Gorilla,’ Jason Witt has 3 knockouts and 8 submissions in his career so far. It provides a perfect picture of what kind of a fighter he really is. He lands 6.89 takedowns per fight which is almost unheard of. He also attempts 1 submission per fight. Witt defeated Cole Williams via an arm triangle submission in October 2020.

But his striking stats are not up to the mark. The 35-year-old lands only 2.26 strikes while absorbing 2.63 strikes per minute. All of his 3 losses in the UFC came via knockout. So it is something that Josh Quinlan can take advantage of. On top of 2 submissions, The Maverick has 3 knockouts as well.

He is blisteringly quick and has great striking and grappling. So the 29-year-old will be the smart pick for this weekend. Quinlan is 6 years younger than Witt and he has better mobility inside the cage. Jason has already lost via knockout 3 times recently. So it will not be surprising if the debutant kicks off his UFC career with a KO win.