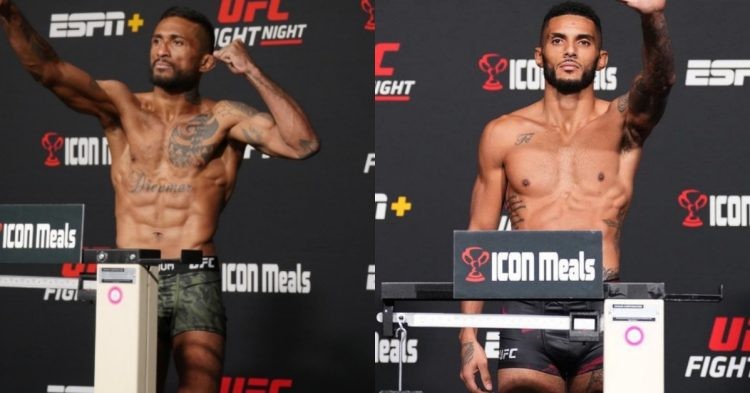 UFC Vegas 62 puts the spotlight on the women’s flyweight division. In the main event, 5th-ranked Alexa Grasso will fight Vivian Araujo. Veteran featherweight fighter Cub Swanson also returns as he takes on Jonathan Martinez in the co-main. However, there are other exciting fights on the card and Joanderson Brito vs Lucas Alexander is one such fight.

Lucas Alexander will forever remember this fight it will mark his debut in the UFC. Although he made his pro-MMA debut in 2016, Lucas has not had a consistent run of fights in regular intervals. But he has remained unbeaten in his last 5 fights and has secured his UFC contract. So Alexander would prefer to kick off his career with a win.

However, no fight inside the Octagon is an easy one and Joanderson Brito is certainly a tough challenge. After a run of wins in 9 successive fights, Brito got his chance to impress UFC President Dana White at DWCS in 2021. He grabbed that opportunity with both of his hands by beating Diego Lopes at the event.

However, he lost to Bill Algeo in his main roster debut via unanimous decision. Motivated to do better, he knocked out Andre Fili in the first round in his following fight. With the win, Brito has put his UFC run back on track and will look to build on a steady streak of wins which should secure him a ranking very soon. So how might the bout play out? Let’s look at the stats.

Joanderson Brito has the better finishing rate out of both the fighters. He has 5 KO/TKO wins and 6 submission wins. As mentioned previously, in his only main roster win in the UFC, he knocked out Andre Fili who is a durable fighter himself. So it just proves how hard Joanderson lands his strikes. However, not just his striking, Brito has a great sense for grappling as well.

The 27-year-old lands 3.79 strikes per minute with a 49% accuracy. He also holds a 50% defence rate as he absorbs 3.28 strikes in the same period. Nicknamed Tubarao, Brito is also averaging 2.90 takedowns per fight with 62% accuracy. It may help him against Lucas Alexander who does have a submission loss in his resume.

Alexander has 3 stoppage wins and two of them have come late in the fight. So he will look to stay in the contest early on and tire out his opponent on his UFC debut. His opponent also holds a big advantage over him on the ground. But he will have a much longer height which may help him in keeping his distance.

But the Brazilian fighter, Joanderson Brito will definitely be the smart pick for this Saturday. Not only does he have more skills, but Brito also has been far more consistent in recent times in terms of his activity. So Brito looks to be the favourite on paper.