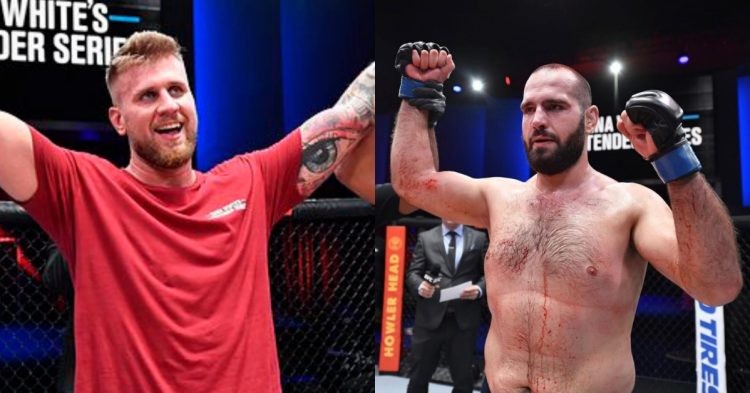 Heavyweight fighters Martin Buday and Lukasz Brzeski will go head to head this weekend at UFC San Diego. The bout is set for 3 rounds and is scheduled to take place in the prelims of the event. While Martin is coming off a win against Chris Barnett on his UFC debut, Brzeski will have his first fight on the UFC main roster this Saturday.

Martin Buday knocked out Lorenzo Hood in the first round of their fight at Dana White‘s Contender Series in 2021. With the win, Buday earned the contract to fight in the UFC and he made a great impression on his debut. He defeated Barnett via decision in April.

Lukasz Brzeski also fought in Dana White’s Contender Series in September of last year. He submitted Dylan Potter in the third round of their fight. Nicknamed The Bull, Lukasz has been undefeated in his last 9 fights. He will look to extend his win streak and start his UFC career on a winning note.

Martin Buday has 10 wins in his career; 6 of them were via knockouts and 2 came via submission. However, in his 2 fights in the Octagon, he is yet to get a takedown. Martin has relied on striking primarily and it may not change against Lukasz Brzeski on Saturday either.

Nicknamed Badys, Buday lands at a rate of 4.77 strikes per minute while absorbing 2.17 strikes at the same time. What stands out the most is his striking accuracy, which is at 72%. It proves that he waits for his chances to strike and lands more often than not. Martin has knocked down his opponent in both of his last 2 fights.

Lukasz Brzeski has 8 wins in his pro MMA career with 5 knockouts and 2 submissions. The Polish fighter is yet to taste defeat in his last 7 fights. He lands at an average of 5.77 strikes per minute while absorbing only 3.10 strikes. But his ground game is also impressive as he lands 2.17 takedowns per fight. He tries 2.2 submissions at an average as well.

So grappling will be the best option for Lukasz to gain victory over Martin this Saturday. Brzeski is more well-rounded and possesses significantly better submission skills than Martin Buday. So the 30-year-old will be the smart pick this weekend.