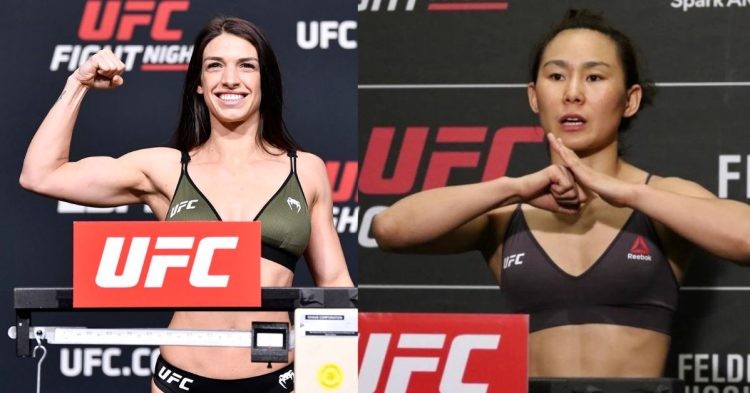 UFC Vegas 61 Main Event will feature a strawweight contender fight between Mackenzie Dern and Xiaonan Yan that will take place on October 1st at the UFC Apex.

Mackenzie Dern is 12-2 and made his UFC debut back in 2018. Dern was on a swift four-fight win streak before losing a decision to Marina Rodriguez. Then a split decision victory against Tecia Torres got her back in the win column. Dern is currently ranked fifth in the Women’s strawweight division.

On the other hand, Xiaonan Yan has a record of 15-3 as a professional mixed martial artist. Yan had made quite the splash since joining the promotion by winning six consecutive fights before getting stopped by current strawweight champ Carla Esparza and then losing to Marina Rodriguez. Yan is ranked just above Dern in the strawweight rankings.

This fight might not be the number one contender fight, but the winner can book the same for the near future. According to some betting odds, Dern is a slight favorite going into the fight this Saturday. Dern is considered to be a Brazilian Jiu-Jitsu specialist. Out of the seven victories she has had in the UFC, four have been due to submission. Yan on the other hand has seven stoppage victories in his pro career but is yet to register a finish in the UFC.

Yan has showcased her striking abilities on multiple occasions but is yet to show his skills on the ground. Fighting a Jiu-Jitsu black belt in Dern could turn out to be a nightmare for her if the fight goes to the ground. Coming off a huge victory against Torres, Dern certainly has some momentum, while Yan coming off two straight losses might not be as confident as Dern.

This looks like a classic Grappler vs Striker match and will eventually come down to the fact that who can keep the fight in their area of interest.

To put it in simpler terms, Dern has a better chance of winning this fight if she manages to avoid getting caught with any unlucky shots. She obviously has the advantage if the fight goes to the ground and has shown decent striking abilities in some recent fights.