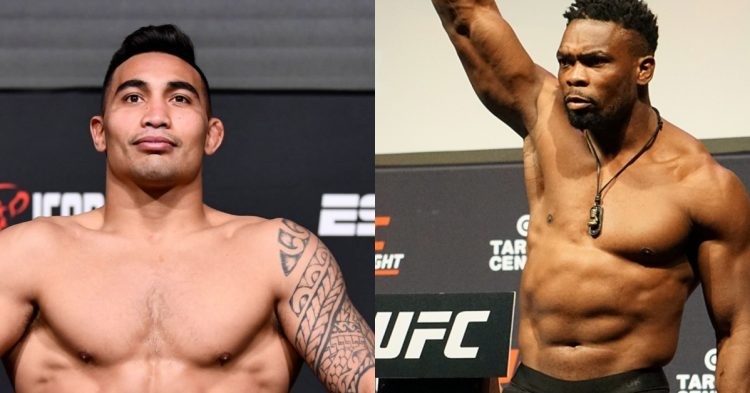 Middleweight fighters Punahele Soriano and Dalcha Lungiambula will clash in the Octagon this weekend. The pair is to set fight in the prelims of UFC Long Island on July 16th. Both fighters are coming off two back-to-back losses each. Hence the loser may be axed from the promotion with another loss in their record.

Hawaiian fighter Punahele Soriano beat Jamie Pickett in an entertaining fight at Dana White‘s Contender Series. He then proceeded to beat Oskar Piechota and Duško Todorović in consecutive fights to keep the momentum going in the main roster of the promotion.

However, things came to a screeching halt once he ran into Brendan Allen last year. Allen dominated Soriano in the fight and handed him the very first loss of his professional MMA career. Although he had a relatively better performance in his next bout against Nick Maximov, it was not enough for Soriano to get back to the winning column.

Similar to Punahele, Dalcha Lungiambula also made his UFC debut with a lot of hype behind his name. Prior to joining the UFC, he was the heavyweight and the light heavyweight champion of EFC Worldwide. Hence, the expectations were high for the 34-year-old fighter.

Fighting out of Cape Town, Lungiambula had his first UFC fight in the 205lbs division. He defeated Dequan Townsend on his debut. But a loss in the following fight made Dalcha move down to middleweight. Although he beat Markus Perez in his 185lbs debut, the success was very short-lived. He lost both of his next two fights against Marc-André Barriault and Cody Brundage.

With their respective UFC careers on the line, both Punahele Soriano and Dalcha Lungiambula will give it their absolute best to survive. Let’s take a look at how the fight may play out this Saturday.

Before suffering the first loss of his career, Soriano had a great finishing record. Out of his 8 victories, the 29-year-old has 7 stoppage wins. He has 5 knockouts and 2 submissions. Both of his UFC main roster wins were via knockouts too. He has an average of landing 4.03 strikes per minute. But Soriano absorbs at a rate of 3.56 strikes per minute too.

Although there is no doubt about his striking game, the same van not he said about his grappling. Nick Maximov took him down 11 times in his last fight. Although he found ways to escape without sustaining much damage, Soriano still needs to work on his takedown defence which currently sits at only 35%.

Dalcha Lungiambula will look to take advantage of Soriano’s poor takedown defence with his superior grappling skills. So far, Dalcha has managed to land 8 takedowns with an average of 2.19 per fight. Lungiambula will need to rely on his wrestling much more because his striking is still a work in progress.

He absorbs 3.72 strikes per minute and lands 3.30 strikes in the same period. Whenever he came across a better striker, Dalcha struggled. Hence, it becomes a classic striker vs grappler bout. Dalcha will have an easier path to victory if he manages to secure early takedowns. Punahele on the other hand, will look to drag Dalcha into a brawl and knock him out.

Punahele is a much younger and bigger fighter with more power. Hence, he will be the smart pick to win the bout by securing an early knockout.

What is the Age Difference Between Gilbert Burns and Herbert Burns?