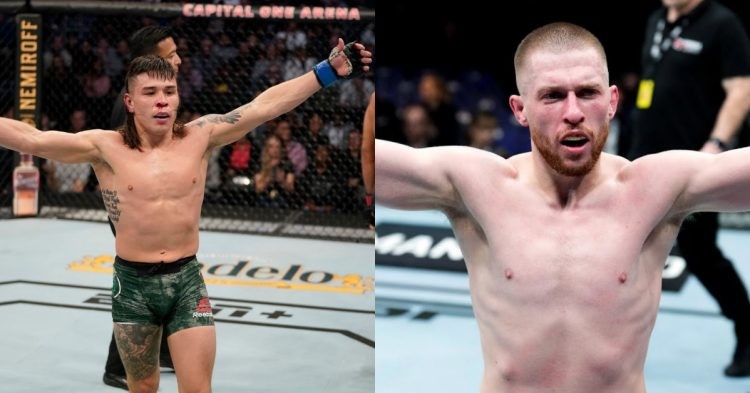 UFC Fight Night: Brian Ortega vs Yair Rodriguez is set to go down this Saturday. Unlike most of the Fight Night events, this particular card will take place on Long Island. The main card features elite fighters like the above-mentioned Ortega and Rodriguez. Former UFC champ Miesha Tate is also a part of the card, taking on Lauren Murphy.

Similar to the main card, the prelims also feature some great fights. Ricky Simon vs Jack Shore is one such fight. The bout will take place in the bantamweight division. While Ricky is ranked 13th in the 135lbs division, Shore is ranked 14th. So the loser of the fight may fall out of the rankings completely.

Simon has had 9 fights in the UFC so far. He had an amazing start to his career in the company. After winning 3 back-to-back fights, Ricky lost two consecutive bouts to Urijah Faber and Rob Font. However, Ricky has won 4 fights in a row since then. But his opponent this Saturday is on a 5 fight win streak.

Out of Jack Shore’s 16 wins, he has has 4 knockouts and 8 submissions. His stats in the UFC so far prove how good he really is. In terms of striking, Jack lands about 4.18 strikes per minute while absorbing 2.27. He has an accuracy rate of 59% and a defence rate of 60%. But his main strength is his grappling and Shore has absolutely insane stats on the mat.

The 27-year-old averages 4.13 takedowns per fight with an accuracy rate of 41%. Jack also has a great takedown defence with a defensive rate of 88%. But that will be tested against Ricky Simon who averages 6.76 takedowns per fight! With two great wrestlers going at it, there is a possibility that the bout may get resolved on the feet.

Ricky has an average of 3.04 strikes per minute and absorbs 3 strikes at the same time. It proves that Jack is much more active on his feet. Shore also possesses a better takedown defence than Simon too.

Although Simon does have 6 knockout wins, Jack is better with his movement. He also has the height and reaches advantage as well. Hence, Shore is the smart pick to win this weekend.