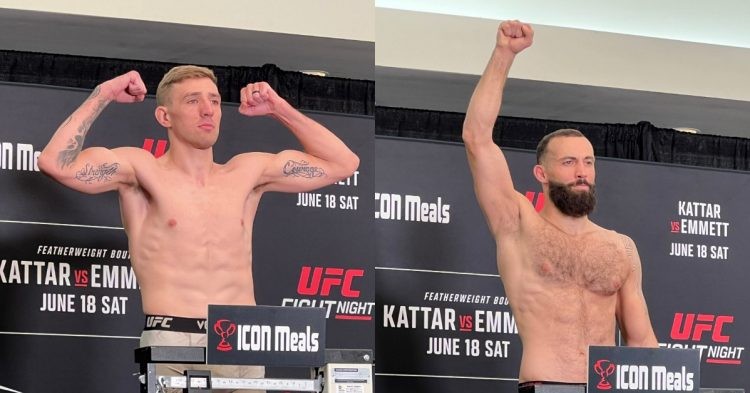 The country of Georgia will certainly have at least one representative at this weekend’s UFC Fight Night. The event which is set to go live from Texas this weekend will feature Roman Dolidze vs Kyle Daukaus in the middleweight division.

Roman Dolize had a late start to his Mixed Martial Arts (MMA) career. He only made his debut in 2016. After winning 6 fights in a row, Dolidze joined the UFC in 2020. He beat Khadis Ibragimov and John Allan in his first and second fights respectively.

Just like Roman, Kyle Daukaus also joined the UFC after a winning streak of 9 fights in a row. But he could not get past Brendan Allen who handed him his first career loss. Daukaus also came up short against Phil Hawes in 2021. But Kyle defeated Jamie Pickett to get back to winning ways.

The Georgian fighter has a very disciplined approach to fighting as he lands 2.36 strikes per minute while absorbing only 1.40. Roman Dolidze makes up for the lack of striking abilities with aggressive grappling, with an average of 2.74 takedowns per fight. Dolidze also averages 1.5 submission attempts per fight.

Kyle Daukaus has a record of getting 2.4 takedowns per fight, with an accuracy of 31%. He also tries his best to get a submission whenever the bout is on the ground. Kyle locks in 2.2 submissions hold per fight as well. The younger Daukaus brother is a respectable striker as well. He lands and absorbs 3.04 and 2.49 strikes per minute respectively.

From the stats mentioned above, it is clear that the fans will see a fight that will primarily take place on the mat. While Roman has 3 submission victories along with 4 KOs, Daukaus has 9 submission wins. Kyle can certainly hold his own with the striking and he does possess the skills to outfox Roman on the mat.

But it will definitely not be easy for either Kyle or Roman to walk away with an easy victory. Neither has been finished so far in their respective careers. Hence the bout has the potential to be a three-round barnburner with Daukaus having a slight advantage.