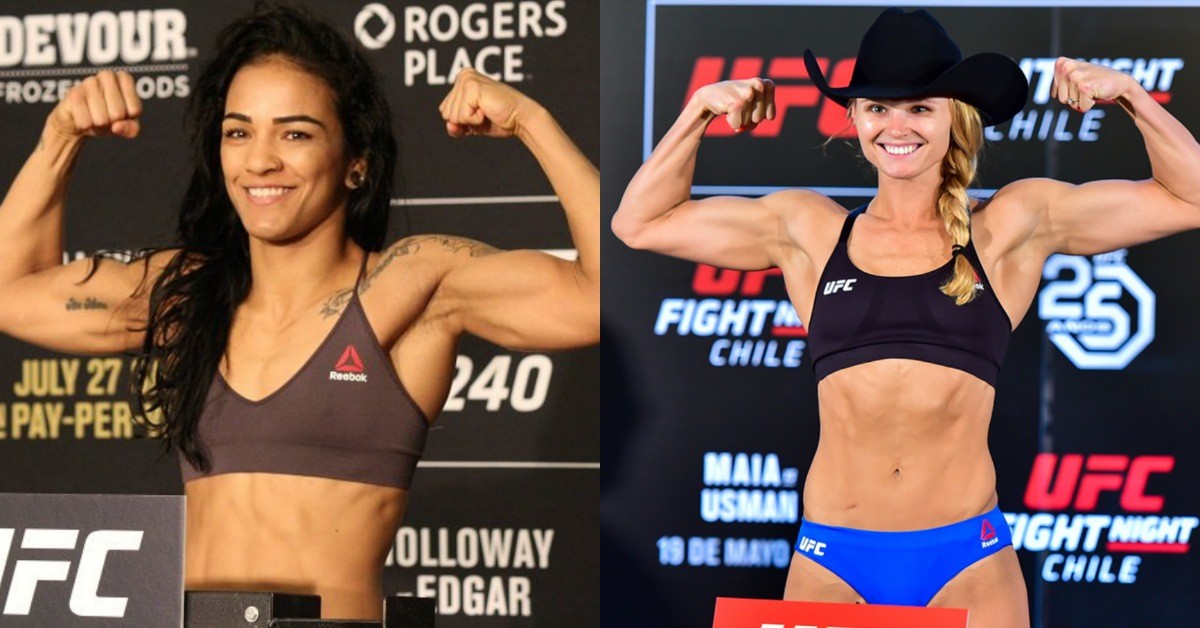 Viviane Araujo will face Andrea Lee in the Women’s Flyweight division this Saturday. The contest between the two Top 10 opponents will take place in the prelims of this weekend’s UFC Fight Night. Araujo is currently ranked 8th in the 125lbs division, while Lee is one spot behind her at no. 9.

The former Pancrase Strawweight champion, Viviane Araujo is coming off an unanimous decision loss against no. 1 ranked Katlyn Chookagian. But she was on a decent run prior to that. Araujo had won 4 of her first 5 fights in the UFC. She holds victories over the likes of Roxanne Modafferi and Montana De La Rosa.

Andrea Lee on the other hand, is having a career resurgence. She was the inaugural LFA Women’s Flyweight Champion. Lee came into the UFC in 2018 and announced her arrival in style. She went to war against Veronica Macedo on her debut and earned the ‘Fight of the Night’ bonus. After 3 back to back wins, she hit a snag. Andrea went on to lose 3 bouts in a row. But she turned things around in 2021 as she finished both Antonina Shevchenko and Cynthia Calvillo in her last 2 fights.

Andrea Lee is a very well rounder fighter and her record proves it. She has 5 submissions and 3 KO/TKO wins in her career so far. But Lee has struggled against opponents who have better grappling skills. In her last loss to Roxanne Modafferi in 2020, Lee was dominated on the ground. Although it was more than a year ago, Viviane Araujo will try to take advantage of that.

Araujo averages 2 takedowns per fight and she is a BJJ black belt. But she doesn’t have any submissions in the UFC yet. Although her grappling maybe better than Lee’s, Viviane absorbs a lot more punishment on the feet. She lands 5.18 strikes per minute, but absorbs 5.48 at the same time as well. With the kind of power Andrea possesses, she can certainly put Viviane under a lot of trouble.

Without a doubt Viviane look to take the fight to the mat. But Andrea Lee will try her best to maintain a safe distance and use her reach advantage to outscore Araujo by landing potshots. The fans can expect to see a full 3 round fight between these two on Saturday.