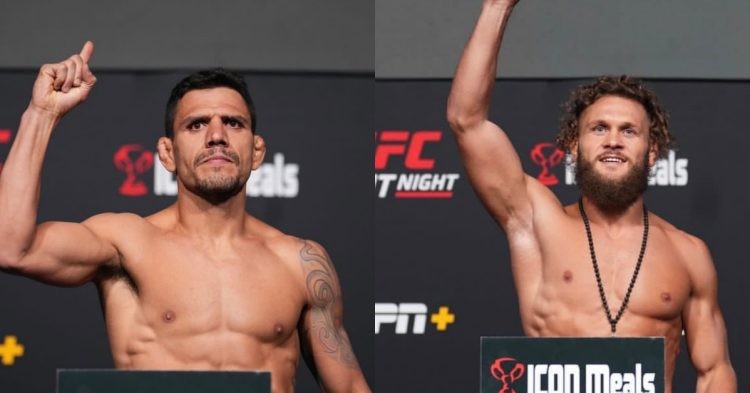 The lightweight division will once again be in focus this weekend. Former UFC Lightweight Champion Rafael dos Anjos will fight rising contender Rafael Fiziev in the main event of this Saturday’s UFC Fight Night. Fiziev is ranked 10th in the division while dos Anjos is just outside the Top 5 at 7th.

RDA beat Anthony Pettis to become the UFC 155lbs champ in 2015. His one and only title defence came against Donald Cerrone in December of the same year. But RDA ended up losing the belt to Eddie Alvarez the following year. After another loss to Tony Ferguson, RDA moved up to welterweight.

After three back-to-back wins against the likes of Neil Magny and Robbie Lawler, dos Anjos earned an interim title shot against Colby Covington. But it started a bad run of form for him as he lost 4 out of his next 5 fights. In late 2020, he finally returned to lightweight and is currently on a 2 fight win streak.

RDA’s opponent on Saturday, Rafael Fiziev made his UFC debut in 2019. Fiziev got caught with a spinning back kick and got finished in the very first round of the fight. But, he bounced back with 5 consecutive wins against fighters like Renato Moicano, Bobby Green and Brad Riddell.

Rafael dos Anjos is a very accomplished grappler. From 2003-2006, RDA earned 1 gold medal and 3 bronze medals across various Brazilian Jiu-Jitsu competitions. In his MMA career so far, dos Anjos has had 10 submission wins and 4 of them came in the UFC. RDA even submitted a grappling maestro in the form of Neil Magny.

But his striking has also improved significantly since coming into the UFC. Ahead of joining the promotion in 2008, Rafael had only one win via KO/TKO. But he has added 4 more to his resume since then. He knocked out Donald Cerrone who is himself a Muay Thai legend. It proves how much RDA’s game had evolved.

That will come in handy as he goes up against Rafael Fiziev who is a sensational striker.

Is Rafael Fiziev the next big thing in MMA?

Rafael Fiziev has a career record of 11 wins and 1 loss. He also has a very decorated Muay Thai career as well. In kickboxing, Rafael has had 39 wins and he has finished 29 of his opponents via knockout throughout the course of his career. He has managed to carry over his finishing rate in MMA as well.

In MMA, Fiziev has 8 stoppage wins out of his 11 victories so far. Not only does he have 7 knockout wins, but he also has 1 submission win as well. The 29-year-old currently holds a blue belt in Brazilian Jiu-Jitsu under Bruninho Barbosa. He does have a very good takedown defence as well. Will it be enough to hold back someone like Rafael dos Anjos? Let’s find out.

Rafael Dos Anjos vs Rafael Fiziev: how does the fight play out?

With an accuracy of 37%, Rafael dos Anjos averages 1.99 takedowns per fight. He also attempts 0.6 submissions per fight well. Although he does have a history of getting smothered by stronger grapplers, RDA will not face that threat against Fiziev.

But one aspect that Rafael Fiziev may take advantage of, is RDA’s striking defence. Although he lands 3.62 strikes per minute, dos Anjos almost absorbs the same amount of strikes (3.24 strikes per minute) in return as well. But dos Anjos does have a very good chin as he has only been knocked out twice in his 44-fight career.

RDA has a significant amount of power behind his punches, which may give Rafael Fiziev something to think about in the fight. Despite being excellent on the feet, he does absorb more strikes than he lands. He lands 5.35 strikes per minute but absorbs 5.57 strikes at the same time.

He will need to be on his toes at every moment as RDA will land some big punches that may prove to be fatal. Ataman currently holds a takedown defence of 95%. But he is yet to be tested by someone with the grappling pedigree that RDA has. Hence, this fight is going to be the biggest challenge of his relatively young career.