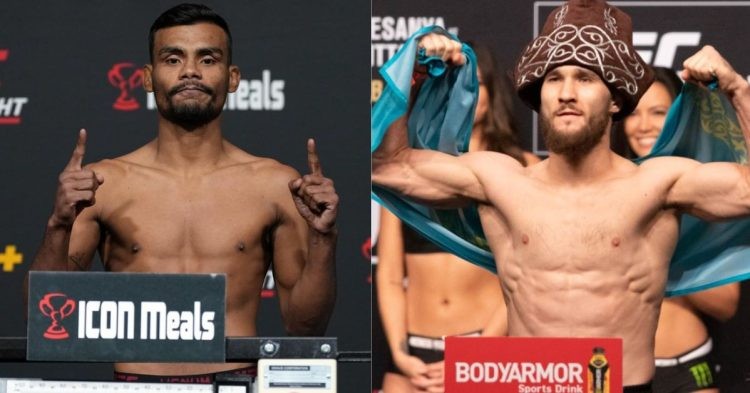 UFC Fight Night: Tsarukayan vs Gamrot will begin with its proceedings this weekend on June 15th at the Apex in Las Vegas. Apart from the highly anticipated stars featuring Arman Tsarukayan, Neil Magny and Shavkat Rakhmonov, there are several other exciting fighters and matchups that one should watch out for.

One such matchup is the three-round bantamweight clash between Raulian Paiva and Sergey Morozov that will take place in the prelims of the event. Taking a look at their previous fights, The Brazilian bantamweight suffered a brutal stoppage loss against Sean O’Malley. On the other hand, Morozov was submitted to Douglas Silva de Andrade at UFC 271.

With the recent results not going their way, this match is extremely crucial if they want to make progress in this stacked bantamweight division. Before moving to the breakdown of this matchup, let’s compare the stats of Raulian and Sergey who will clash against each other at UFC Vegas 57.

Sergey Morozov has not been able to gain momentum as he has lost two of his three fights in the UFC. On the contrary, Raulian Paiva was in great form until he squared off against Sean O’Malley at UFC 269. With that being said, this is an interesting matchup as both the bantamweights have different strengths and weaknesses.

Morozov relies a lot on his wrestling and his only win has come through a decision where he controlled the majority of the bout on the ground. Whereas Paiva is a powerful striker with good knockout power who likes to land huge output of strikes and pressurise his opponent.

However, in this matchup, the Brazilian bantamweight needs to be careful while extending as the Russian fighter has good takedown skills and can grind out a victory on the ground. So the key for Paiva to win this matchup is to keep distance and use his movement and speed as much as possible.

He has a slight edge in terms of height and reach and can use this to his advantage while striking. If this bout heads towards an all-out striking battle then Raulian Paiva has the power to put the lights out of Sergey Morozov.