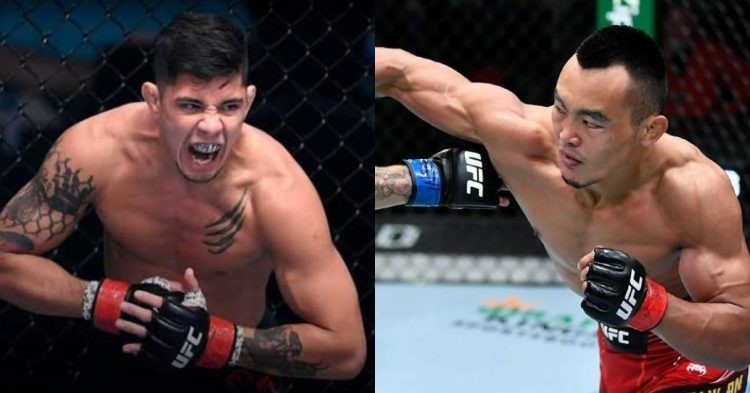 UFC Fight Night: Tsarukyan vs Gamrot is all set to take place this weekend on June 15th at the Apex in Las Vegas. This event features some exciting fighters like Arman Tsarukyan, Shavkat Rakhmonov, Neil Magny and many others. However, there are several other fascinating matchups on the card that one should watch out for.

Featherweight veteran Sha Yilan will be back in action as he takes on TJ Brown in a three-round bout that will take place at the prelims of UFC Vegas 57. Yilan last stepped inside the octagon in November last year where he picked his first UFC win against Soriano via decision.

On the other hand, Brown is coming off two back-to-back wins. Therefore Downtown will be high on confidence as he looks to extend his winning streak and get one step closer to the top 15 rankings o145-pound division. Before moving to the breakdown, let’s compare the stats of these two featherweight contenders that will battle it out against each other at UFC Vegas 57.

After a dreadful start to his UFC career with two losses on the trot, TJ Brown has bounced back strongly with two decision wins. Going into this bout, Brown has a three-inch reach advantage which will help him against Yilan in a striking battle.

Moreover, he has a better all-round game than Sha Yilan. He has displayed an improved ground game in his last two last fights by landing a combined eight takedowns. Therefore he can adapt to the situation and strike or grapple as per the requirement of the situation.

His only weakness in this fight is his durability as he walks into dangerous shots. Hence if he avoids any unnecessary striking exchanges then he would most likely emerge victorious at UFC Fight Night.