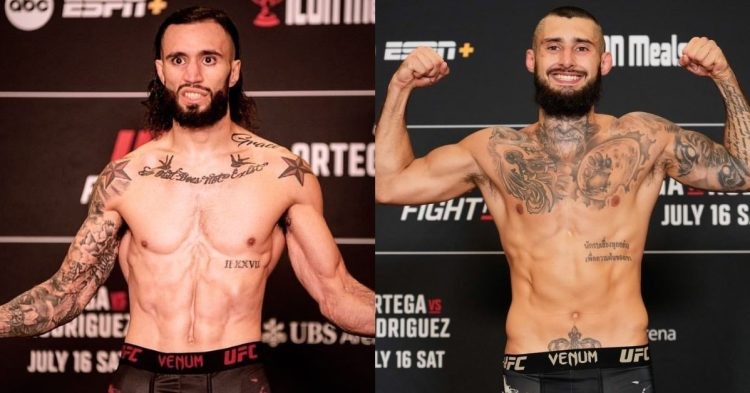 This weekend’s UFC Fight Night: Ortega vs Rodriguez will take place at Long Island in New York and this event features an exciting lineup of fights that will keep the viewers entertained throughout the entirety of the fight card.

Taking a look at the card, one fight that has great potential to stand out from the rest of the main card is the three-round featherweight matchup between Shane Burgos and Charles Jourdain.

BURGOS vs JOURDAIN! #UFCLongIsland is LIVE and FREE TOMORROW on @ABCNetwork at 2pm ET! pic.twitter.com/QQv3wJYaMu

Owing to the fact that both these featherweights have aggressive fighting styles and consequently, we could witness a three-round barn burner from this matchup. Going into this fight, Charles Jourdain will be looking to extend his winning streak to three after he picked up a quick submission win over Lando Vanatta in his last bout in April.

On the other hand, Shane Burgos snapped his two-fight losing skid after edging past Billy Quarantillo in his recent bout. Before we dive deep to the breakdown and styles of the fighters, let’s compare the stats of these two featherweights that will collide inside the UFC octagon.

Shane Burgos had a terrific start to his UFC career as he won six out of his first seven fights in the promotion. However, Hurricane’s steadfast rise slowed down after suffering two defeats against the likes of Josh Emmett and Edson Barbosa

With his recent win, the featherweight: contender needs to make a statement in his upcoming matchup if he wants to break it into the top 10 of the 145-pound division. Speaking about his upcoming fight against Charles Jourdain, fans can expect Shane Burgos to go with his aggressive intent of finishing the fight.

Hurricane has great striking skills as he is a type of fighter who likes to land a lot of strikes. However, along with his high output comes the risk of absorbing a lot of strikes and hat is been the reason for his downfall in two of his three losses. Because both Calvin Kattar and Edson Barbosa have taken advantage of this fact and finished the fight.

On the other hand, his opponent Charles: Jourdain has made a remarkable turnaround in his UFC career after losing four of his first six fights by winning his previous two bouts. But Jourdain will step inside the octagon. with a massive reach disadvantage of six inches which would prove a key factor in this matchup.

Similar to Burgos, Jourdain is also a good striker who likes to land high output of strikes. However, Hurricane is much more lethal when it comes to inflicting damage and with the size advantage, he has in this matchup one can expect him to cruise through a decision victory at UFC Fight Night.