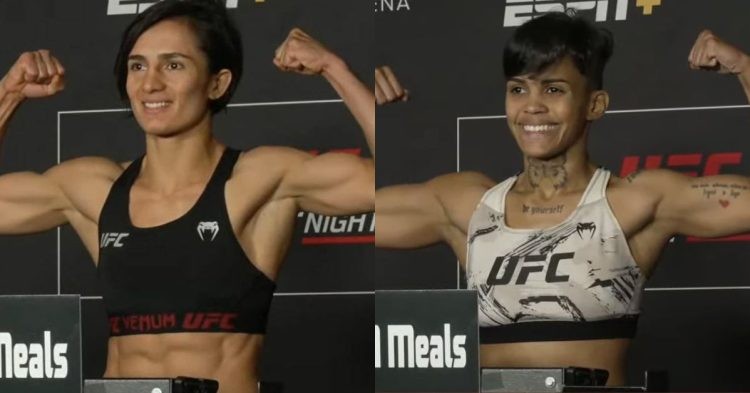 UFC Fight Night: Vera vs Cruz will feature several exciting bouts that will keep the viewers entertained throughout the evening. In this highly anticipated event, debutants Yazmin Jauregui and Iasmin Lucindo will clash against each other in a three-round women’s strawweight bout on the main card.

Raise your hand if it’s your UFC debut tomorrow ✋

This matchup will take place this weekend on August 13th at the Pechanga arena in San Diego, California. The Mexican strawweight fought previously in the Combate Global organization and has put up many dominant performances. Yazmin is currently undefeated in MMA with a record of 8-0 out of which she has finished six of her opponents.

Her opponent Lucindo on the other hand, who is just 21 years old has a ton of experience under her belt after fighting in different fighting organizations. Both Jaurequi and Iasmin are young prospects with high potential and subsequently, fans can expect a brutal war between these two strawweights.

This UFC Fight Night women’s strawweight matchup between Yazmin Jauregui and Iasmin Lucindo is a classic striker vs grappler fight. Yazmin likes to stand and strike with her opponents and we can expect an aggressive approach in her UFC debut as she would attempt to finish the fight with her destructive power.

On the other hand, Lucindo is a type of fighter who prefers to take her opponents down and control them on the ground. Just like Jauregui, Iasmin has great knockout power but the Medican strawweight has an upper hand when it comes to striking.

So the outcome of the fight would probably come down to whether Yazmin can defend Iasmin’s takedown attempts. So far in her MMA career, the 23-year-old fighter has shown great takedown defense. If she manages to hold her ground, then the fight would most likely go to a decision and we can expect Jaurequi to get her hands raised by the referee at UFC San Diego.