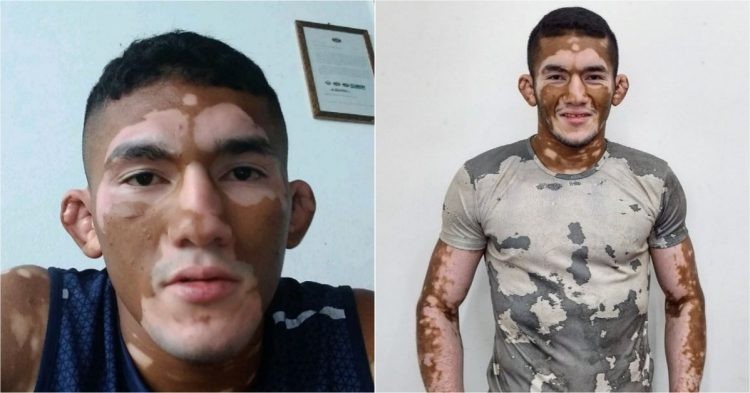 His first UFC opponent, Thiago Moises, was originally supposed to be facing Guram Kutateladze. However, Melquizael Costa got the call after Guram pulled out of the contest. He was certainly gaining a lot of momentum and his UFC call-up was just a matter of time. Despite all his abilities, one thing that the fans noticed more than anything else was his skin.

During an interview with MMA Junkie in May 2022, Costa opened up about his condition. He suffers from a rare condition called Vitiligo. The condition causes distortion of skin pigmentation. Costa first realized that he had the condition at the age of 5. Apparently, his friends did not want anything to do with him as his skin formed unusual patterns.

Despite being a fun-loving child, his condition drove people away. Apparently, his friends felt “nauseous” around him. Growing up, Costa suffered a lot of discrimination because of his condition. He had enough at one point and decided to stay away from people. The fighter wanted to escape the constant emotional stress that he was under.

Melquizael Costa described the situation in the interview and added, “I went to the countryside and started working on a farm, I didn’t want to go to the city. I didn’t want people to see me. Depression started to take roots in myself, as well. I started feeling for myself, what they were feeling, disgust. Martial arts was actually what saved me from this.”

When did Melquizael Costa start his MMA training?

As Melquizael Costa mentioned, Martial Arts gave him a way to express himself. But his path to MMA is perhaps one of the most fascinating stories ever! As a young child, Costa used to have conversations with his father about his goals in life. However, his condition did not allow him to be a policeman or a doctor.

But he finally found his life’s calling in a video game. Thanks to a UFC video game on Playstation, Costa came to know of MMA. And, as MMA fans know, it doesn’t take much for someone to become a fan. Not only did Costa become a fan, but he also made it his career!

“I was playing it and then I saw this guy and he looked exactly like me, I was like, ‘Is this for real? Is this made up? Who is this?’ I Googled him and I saw he was a UFC fighter. I was like, ‘Damn, this guy is just like me, so I can be a real UFC fighter. I finally found something I can be in my life.’ So, Scott Jorgensen, I tell everyone he was the one who pretty much opened this idea in my mind, who showed me it would be possible to get there someday.”

However, getting started in MMA is not really an easy task. He was already uncomfortable being around people. Hence, it was hard for him to open up or take off his shirt for training. But, there was a huge change in his mindset after his brother passed away in a car accident. Costa’s brother had a lot of faith in him. Hence, he wanted to honor his brother’s memory and focused all his attention on MMA.

“I took the energy and the feelings that I had from that to motivate myself even harder and keep going, when he died, he died believing I would be able to get somewhere. I said I would do it for me and for him. That took me to another level and motivated me in order to move on.”

As he kept moving up in his career, his Vitiligo mattered less and less to him. Fighting gave him a completely new outlook on his life. He was no longer the shy kid who ran away from people because he was afraid of being made fun of! Now, he is proud of his skin and isn’t afraid to show it off!

“I love my skin, I love how I look. I can’t imagine myself being any other way. Today, I love to take pictures. I love to show up. I love when I take pictures with 10 other people, I’m the highlight of the photo. I’m the only different there. Everyone will look at me. It makes me proud.”

Not only is he making his own family proud, but Costa is also a source of inspiration for many. He even shared a story where someone with the same condition as his, came up to Melquizael Costa and thanked him for inspiring them. Costa now sees his condition as a blessing in disguise as it helps him stand out in a crowd.

What is Melquizael Costa’s MMA record?

Melquizael Costa made his MMA debut in 2014 against Benjamin Junior Coelho Pantoja. He won the bout via split decision. However, it started off an 8-fight win streak which saw him finish 5 of his opponents. Costa faced his first defeat in 2017, against Elismar Lima da Silva. The 26-year-old lost the bout at the end of the first round when doctors stopped the contest.

At the time of joining the UFC, Costa’s MMA record stands at 19-5. Costa is not a one-trick pony by any means. Melquizael has 7 KOs, 6 submissions, and 6 wins via decision. So it shows that Costa is capable of both finishing the bout early and going the full distance. Thiago Moises will definitely provide him with a tough challenge on his UFC debut.

“Make Sure I Didn’t Have Any Kind of Disease” – Scared of Brittney Griner’s Height in High School, Griner’s Father Took Necessary Steps for His Daughter