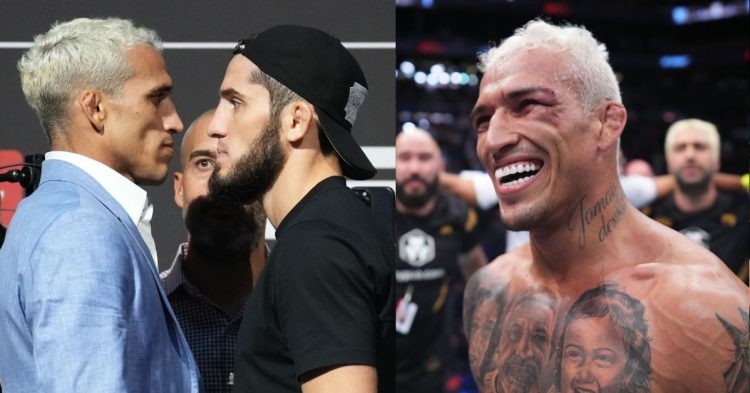 As we move closer to UFC 280 with each passing day, the anticipation about the main even is building up. The fight that everyone has been wanting to see for such a long time is about to go down this weekend. A fight that showcases a high-level battle between functional Jiu-Jitsu and Dagestani wrestling is finally here. We’re looking at the fight that has been hyped for months, the former champion Charles ‘Do Bronx’ Oliveira vs the rising contender Islam Makhachev.

Oliveira, who has proven his doubters wrong on multiple occasions, happens to be the underdog yet again in this matchup. Meanwhile, this fight would be Islam Makhachev’s toughest challenge to this day as the quality of opposition that he has faced so far has been sub-par when compared to the level of competition Oliveira has beaten.

Various professional MMA practitioners and fighters have given their predictions in their appearances on James Lynch show. Since Oliveira has ruined many people’s parlay multiple times, it seems like finally, Do Bronx has succeeded in getting the masses to favor him. Fighters like Max Griffin, Aljamain Sterling, Mateusz Gamrot, and Tim Welch have given their thoughts and predictions on the matchup.

Robert Whittaker has picked Islam Makhachev to come out as the winner despite listing multiple attributes of Oliveira’s game that might be really effective over the course of five rounds. He complimented the faith Oliveira has in his ground game and how he never hesitates in taking the fight to the ground.

He also had some nice words to say about Oliveira’s defensive striking as it’s hard to get a good grappling position over him due to his knees and elbows. Even then, Whittaker picked Islam due to what he’s seen of Oliveira, stating that he has been taken down and controlled before.

Max Griffin has picked Charles to beat Islam Makhachev as he believes Islam’s wrestling won’t be enough for the Brazilian and he believes that Charles has a significant advantage in the stand-up game.

Mateusz Gamrot, a rising lightweight contender in the UFC has picked Makhachev to win this fight, given that Makhachev plays smart and sticks to his game plan. He believes the Russian would prove to be too much for the Brazilian.

Tim Welch has also picked Oliveira to win the fight as he believes Charles is too dangerous off his back to be dominated like Makhachev’s other opponents.

In the words of Tyson Chartier, the fight resembles the fantasy matchup between Khabib Nurmagomedov and Tony Ferguson that never materialized. He also stated that it’s like a better Ferguson versus a sub-par Khabib.

The predictions have been favoring the former champ so far as he finally seems to be getting everyone’s respect, the outcome will be looked forward to by all the MMA fans this weekend.