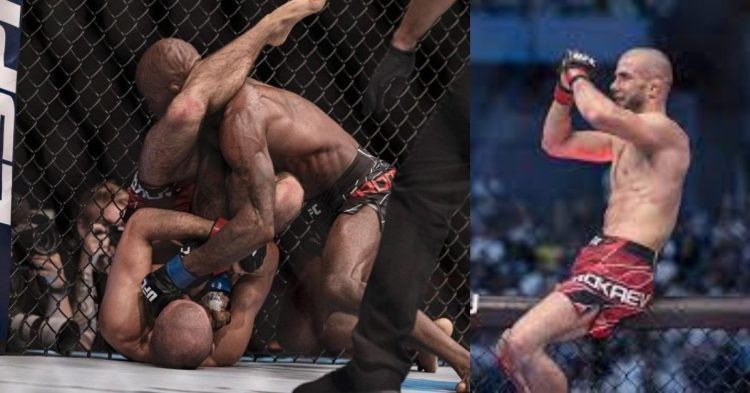 Muhammad Mokaev defeats Malcolm Gordon via submission (armbar) at 4:26 in round number 3 and retains his undefeated record.

Mokaev won his third straight fight in the UFC, with a very late armbar finish. Although Mokaev wasn’t able to showcase the dominance he displayed in his previous fights and had to go through some serious adversity to get the victory. Gordon was a big underdog going into the fight but displayed incredible heart and perseverance and took the fight to Mokaev, who many believed would run through Gordon.

Early into the fight Gordon came out swinging and tried to land some big power punches but didn’t find much success and got taken down. Although he started to gain some momentum in the second round by winning some grappling exchanges, but wasn’t able to sustain the momentum. In the end, Moakaev’s mat skills proved to be too much for him.

Mokaev did show some moments of vulnerability and got too cocky in certain situations. Despite the finish, he was able to get in the final seconds, it wasn’t a very impressive performance from Mokaev. Mokaev 22, certainly has a very bright future within the UFC, but will surely have to pull his guard up and not get comfortable in certain situations in the fight as he did against Gordon.

In this post-fight interview, immediately after the fight, Mokaev accepted the fact that he underestimate Gordon’s experience and further demanded a top 15 opponent from UFC president Dana White while also sneaking in a proposal for the fight of the night bonus.

How did Fans react to Muhammad Mokaev submission victory?

He did good for a prospect, going through adversity and getting the finish. But he’s overhyped by the company and fans due to lack of good fighters in the flyweight division. 10 years difference with Gordon and only 22 Years old. He can improve.

Was rooting for him but he definitely showed some holes in his game. Cardio?