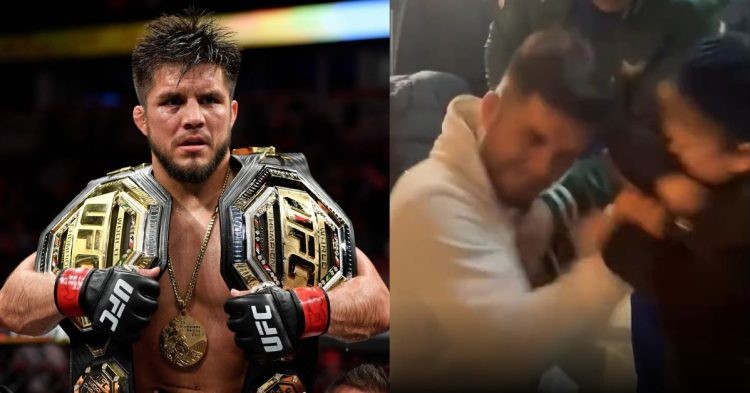 Henry Cejudo gets hit in the face by Hasbulla (Credit: Twitter)

The viral MMA sensation, Hasbulla Magomedov has finally come face-to-face with former UFC champion Henry Cejudo. The pair have been going back and forth on social media for a while now. In a recent post, they can be seen having a face-off but things quickly went wrong.

In the clip, Cejudo and Hasbulla are seen having a face-off while ‘Mini Khabib’ surprisingly catches ‘Triple C’ with a wild elbow. After that, both of them had a little fight but obviously, both of them were having fun and there is no bad blood between them.

Hasbulla first went viral for his face-off with Tajikistani YouTube singer, Abdu Rozik, where he aggressively punched Rozik. Since then, he has become a household name around the world and any MMA fan knows about him.

The viral MMA sensation has also engaged in Twitter wars with Conor McGregor, Henry Cejudo, and others. He recently ‘smashed’ the P4P No.1 Alexander Volkanovski and now it seems like Cejudo got in his way.

Hasbulla is very close to Khabib Nurmagomedov and often appears with him at UFC fights. He was also seen in Islam Makhachev’s recent fights. ‘Mini Khabib’ recently signed a deal with the UFC, where he will be earning huge money for only attending the fights.

Henry Cejudo will finally return against bantamweight champ Aljamin Sterling (22-3), after a long-awaited comeback. ‘Triple C’ has not competed in over 2 years since his victory over Dominick Cruz at UFC 249.

Cejudo is a talented fighter but many are wondering if he can still fight at the highest level against Sterling. ‘Triple C’ is known for his elite wrestling and he is an Olympic Gold medalist. He also trains with MMA legends Demetrious Johnson, and Jon Jones, to name a few.

Apart from his superior ground skills, he is also a skilled striker. In his last fight, Cejudo utilized his knees to knock out Cruz and also stopped T.J. Dillashaw in the first round. Cejudo is 16-2 as a professional and has a record of 10-2 in the UFC.

He is seen as someone who can still take on the current bantamweights. ‘Triple C’ will potentially fight Sterling for his return match, but the promotion has yet to announce that.