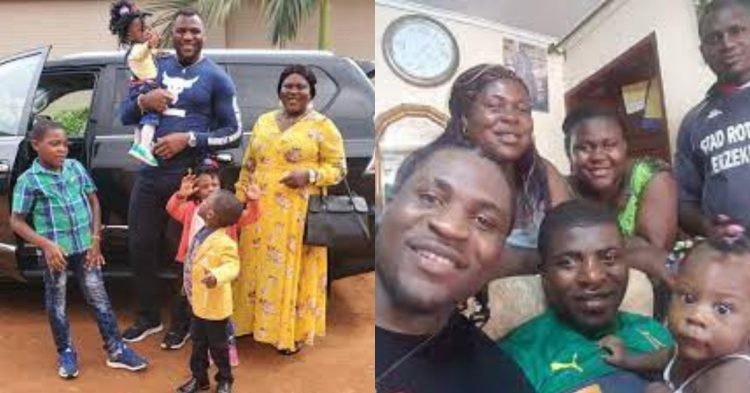 Francis Ngannou is one of the biggest and baddest stars in MMA. Considered the hardest puncher in the world, he is the former UFC Heavyweight champion. Prior to his departure from the UFC, Ngannou was the heavyweight champion and #5 in the UFC men’s pound-for-pound rankings.

Despite his status and fame, Ngannou actually comes from very humble beginnings. In fact, Ngannou was born in Cameroon, and spent most of his life in poverty, before running away to France. Moreover, he was also arrested in Spain for crossing the border illegally.

Upon his arrival in Paris, Ngannou was also homeless for a while. Fortunately, trainer and coach Fernand Lopez took him in and trained him. Eventually, after years of fighting, Ngannou made his way to the UFC, and the rest is history.

Francis Ngannou’s upbringing and his family

As mentioned previously, Ngannou had a rough upbringing. Surrounded by poverty, Ngannou was quickly thrown into the workforce. Moreover, Ngannou also had an abusive father which led to his parents getting divorced when he was just six.

As such, Ngannou was then he was sent to live with his aunt, where he learned the truth about his father’s legal troubles. Apart from his mother, he also has siblings. Seeing his family struggle was a constant source of motivation for Ngannou and his success means that he can now fulfill his promise to them.

Reflecting on his journey, Ngannou has often spoken about how he struggled to his family the best life possible. Not only that, but he is also very active when it comes to charity and believes in helping the poor children in his native Cameroon.

How did Francis Ngannou get his start in MMA?

Francis Ngannou was initially interested in boxing but was suggested by his coach to train in MMA. Following his move to France, Ngannou began his professional MMA career in 2013, fighting in local promotions like 100% Fight and SHC.

Soon thereafter, Ngannou made his UFC debut in 2015, knocking out Luis Henrique in the first round. From then on Ngannou only ever lost 2 fights in his UFC career. As such, he beat the likes of Stipe Miocic, Alistair Overeem, Ciryl Gane, and more. Thus, Ngannou’s incredible UFC record includes 12 wins, with 11 of them being finishes.

Ngannou has amassed several brutal knockout victories in his career, including the one over Alistair Overeem and Stipe Miocic. Thus, he has also won the Performance of the Night bonus award six times and made a handsome amount in his career earnings.

With UFC President Dana White announcing Ngannou’s free agency, fans are excited to see where ‘The Predator’ goes next.

Who is Francis Ngannou dating currently?

As of 2023, Ngannou is not dating anyone. Currently 36 years old, Francis tries to keep his personal and love life private.

Previously, there were also rumors of Ngannou possibly dating fellow UFC star, Miesha Tate. However, there is no substance to them as the pair are simply good friends and train together.

As such, you can say that Francis is a dedicated professional and spends most of his time training or with family. Moreover, recent leaks and rumors indicate that Francis may well be on his way to the PFL, particularly, their Super Fight division. If so, we can’t wait to see who he fights next!