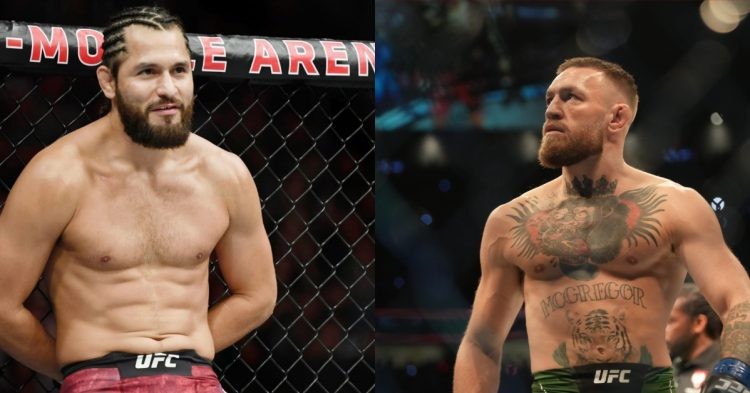 Is Conor McGregor about to have the biggest Pay Per View (PPV) fight of his career? From Charles Oliveira to Kamaru Usman, Conor has been linked for a fight against every elite opponent possible. However, one name that has escaped the fans’ minds, is Jorge Masvidal.

Recently, Conor McGregor took a shot at the Street Jesus. Jorge Masvidal is currently under trial for his alleged assault on Colby Covington. Although Masvidal has not addressed the issue directly, he has stated that he will defend his family’s honour regardless of the circumstance. To which Conor McGregor responded on Twitter. In a deleted tweet, he wrote,

“An absolute pigeon brain this guy is. Stupid beyond belief.”

Jorge Masvidal was quick to respond. He used the opportunity to call Conor out for a fight. He claimed that the fight will be the biggest one of Conor’s career so far. Jorge also questioned the former UFC double champ’s willingness to step into the Octagon with him. He tweeted,

This pea brain is the biggest fight of your life. So you’re either too scared or too stupid to get this check

Is Conor McGregor vs Jorge Masvidal next?

Although they do not have an extensive history together, Conor and Jorge were on a collision course in 2020. At that time, Jorge was having a dream run which saw him knockout Darren Till and Ben Askren in a brutal fashion.

But his star-making performance came against Nate Diaz at UFC 244. Masvidal utterly dominated Nare on the feet and won the BMF Championship. After that event, it was heavily rumoured that Jorge wanted to fight Conor in the main event of a PPV. Due to him being at the height of his powers, there was a lot of interest in the fight as well.

To provoke Conor McGregor into a fight, Jorge Masvidal even showed up at UFC 246 when The Notorious one fought Donald Cerrone. But Conor refused to call him out and went on to fight Jorge’s teammate Dustin Poirier twice at UFC 257 and UFC 264 respectively.

However, this may just be the best opportunity to finally match them up. Conor has clearly declined since his glory days in 2016. He is also coming off a potentially career-altering injury. Jorge on the other hand has lost all 3 of his last fights. As a result, this will be a way to get one more big PPV event out of them.

Jorge Masvidal has guaranteed to come back this year for one more fight after losing to Colby Covington at UFC 272. With McGregor scheduled to fight in the fall of 2022, the timeline aligns for a bout between them later this year for a big spectacle event. UFC usually puts on a big fight to end the year on a high. Which fight is bigger than McGregor vs Masvidal from a fan’s perspective?

Do you think Conor McGregor’s return fight will be against Jorge Masvidal? If so, who do you think will win the fight between the two? Let us know your thoughts in the comments down below.