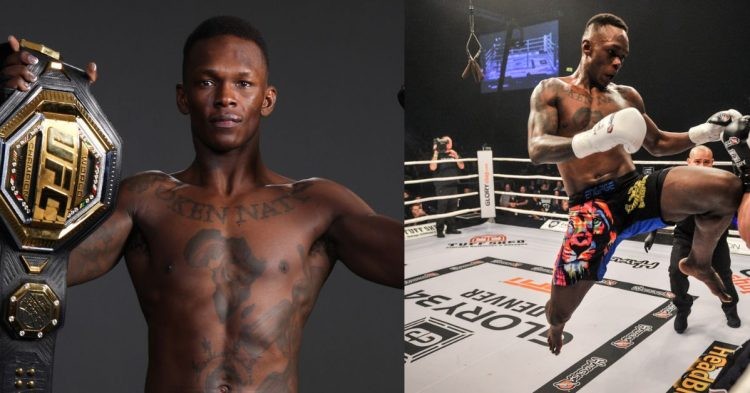 Israel Adesanya aka The Last Stylebender has been ruling over the middleweight division for a while now. Unlike many other fighters, the Nigerian mixed martial artist started training at the age of 18 in kickboxing. Being a kid who was not into sports but rather had interests in Japanese animes like Death Note and Naruto, Adesanya was drawn into mixed martial due to the bullying he faced in high school.

At the age of 20, Izzy started his professional kickboxing career and went on to accumulate an amateur record of 32-0 before turning professional. Then he moved to New Zealand and began training under coach Eugene Bareman at City Kickboxing (CKB). After that Adesanya went to Glory kickboxing and won the next six fights and finally lost to the Glory middleweight champion Alex Pereira, starting their rivalry.

What is Israel Adesanya’s record in kickboxing?

Adesanya is undoubtedly an accomplished kickboxer. He persuaded his career in kickboxing at the age of 20 after gaining inspiration from the Muay Thai-based film Ong-Bak. Simply looking at his kickboxing career, Izzy has an impressive amateur record of 32-0 and a total kickboxing record of 75-5.

However, he does not have many notable wins in his kickboxing career. He actually fell short against many well-known kickboxers he faced, including Alex Pereira, Simon Marcus, and Jason Wilnis. His two losses against Pereira broke Izzy’s winning streak and after his knockout defeat in 2017, Adesanya ended his kickboxing career. During his kickboxing days, he also fought in more than one weight class.

When did Israel Adesanya make his UFC debut?

The UFC middleweight champion signed his UFC contract in December 2017 and had his first fight against Rob Wilkinson on 11 February 2018, at UFC 221. Adesanya won the fight in the second round by technical knockout and won the Performance of the Night bonus.

On 13 April 2019 Adesanya fought Kelvin Gastelum for the interim UFC Middleweight Championship and won via unanimous decision. After that it’s been a champion ride for Israel Adesanya, defending his middleweight title five consecutive times.

With victories over Jared Cannonier, Robert Whittaker (twice), Marvin Vettori (twice), Paulo Costa, Yoel Romero, Kelvin Gastelum, and Anderson Silva, Adesanya is gradually establishing himself as the greatest middleweight in UFC history. Over the years Adesanya has turned out to be the most technical fighter with the best fight IQ inside the cage and quite possibly, one of the best strikers in the history of UFC.