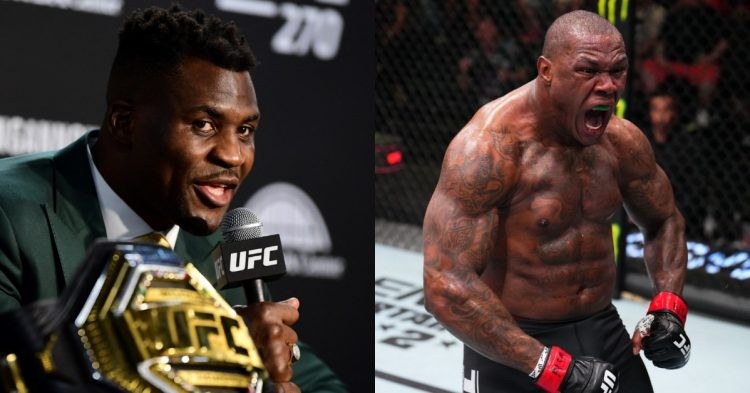 Mohammed Usman knocked out Zac Pauga in the finale of The Ultimate Fighter season 30 to win the UFC contract. UFC Heavyweight Champion Francis Nagnnou took to Twitter to congratulate the newest addition to his division.

The Motor made a statement at UFC Vegas 59 with the way he finished the fight against Pauga. He was the betting underdog heading into the contest. But it did not affect him in the slightest as he stepped inside the Octagon. Whereas his opponent looked eager to get a finish, Mohammed was calm inside the cage.

Even in the 1st round, Mohammed landed great jabs which set Zac back a few times. Although there weren’t any immediate effects of his strikes in round 1, Usman did not lose his poise. It paid off in the second round as he countered Zac with a perfect left hook which turned Pauga’s light out. Ngannou congratulated Usman on his victory and joked that he does not want to face him inside the Octagon.

A new contender was born in the heavyweight division and personally I want no business with this man 😂 Congrats brother @Umohammed97 🙌 pic.twitter.com/YMSEA6oPdS

It is no secret that Francis Ngannou is very good friends with Mohammed Usman’s older brother Kamaru Usman. Ngannou even had Usman in his corner for his last two fights against Stipe Miocic and Ciryl Gane. Hence it will be interesting to see Kamaru’s reaction if Ngannou and Mohammed actually fight inside the Octagon.

Mohammed also had a working relationship with Francis thanks to his brother Usman. In an interview in 2020, Usman revealed that Francis invited him over for a sparring session. Although stars like Kamaru and Luke Rockhold were present in the gym during their 30-minute grappling session, according to The Motor, all the eyes were on them.

However, Usman was just 2-0 at the time and had a long way to go before he had the chance to fight inside the Octagon. But time flies and Usman is now officially a fighter in the UFC’s heavyweight division. But he is relatively untested and still has a lot to work on before he gets anywhere near the title.

If he does end up earning the title shot, fans can be sure that there will not be any bad blood between the two camps. It will be an opportunity for both to earn money and they will take it with open hands. But the intrigue of seeing two friends stepping inside the Octagon to face each other will always captivate the fans.

Do you think Mohammed Usman will earn an opportunity to fight for the UFC title in the future? If he does, do you think there will be any bad blood between Francis Ngannou and Usman? Let us know in the comments down below.