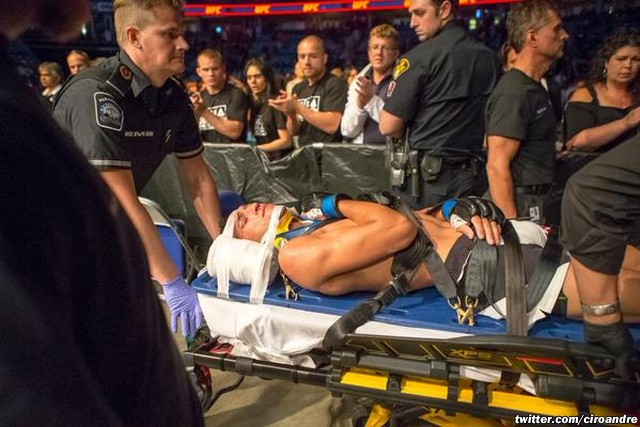 Charles Oliveira fights for the UFC lightweight title against Michael Chandler in the main event of UFC 262. It’s an exciting matchup and Oliveira should be the favorite as he is on an impressive 8 fight win streak.

However, Charles Oliveira has not been this dominant force in the octagon throughout his career. It was when he moved up to the lightweight division Oliveira was able to unlock his true potential. But, during his run in the featherweight division, Olveira suffered a lot of setbacks. And one of them came in the hands of the former featherweight champion, Max Holloway.

Max Holloway and Charles Oliveira fought each other in the main event of UFC Fight Night 74 back in 2015. Back then Holloway was the number 5 featherweight in the world and Oliveira was one of the strong contenders for the title. It was a highly anticipated fight that ended in an anti-climatic fashion.

The fight ended in round 1 after Charles Oliveira injured his neck while attempting a takedown against Holloway. At first, it seemed Oliveira hurt his shoulder. But later on, he explained in an interview:

“I injured my neck in training, but did physical therapy and thought everything was fine. But when I fell against the cage everything went numb, I couldn’t feel my body.”

Charles Oliveira made a quick return after the injury

Later on, it was revealed that Charles Oliveira suffered a micro tear in his esophagus(generally knows as food pipe) during the fight. It is believed that Oliveira got that tear while going for the takedown and twisting his neck and shoulder in the process. Though it was a severe injury Oliveria recovered pretty fast and was able to make his octagon return a few months later.

Though Max Holloway was rewarded a TKO win Oliveira did not consider that a real loss. Oliveira believes:

“It wasn’t really a loss. What happened happened and they had to stop the fight. I don’t consider it a loss. It’s an injury I have that I’d already had, and I hit my head and I felt it again. Now it’s fine” 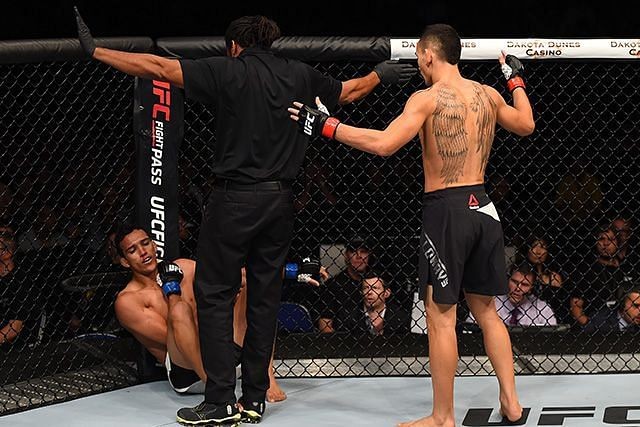 The fight lasted only 90 seconds so it’s hard to tell what would have happened had the fight continued. But, Holloway was winning the fight until it lasted. He was the quickest fighter, he was landing his strikes precisely early in the fight and he got the top position after defending the takedown.

The times have changed now. Both Max Holloway and Charles Oliveira are two of the top fighters in UFC. If Oliveira wins the title and goes on a dominant run in the lightweight division it won’t be surprising to see him Holloway in a rematch.