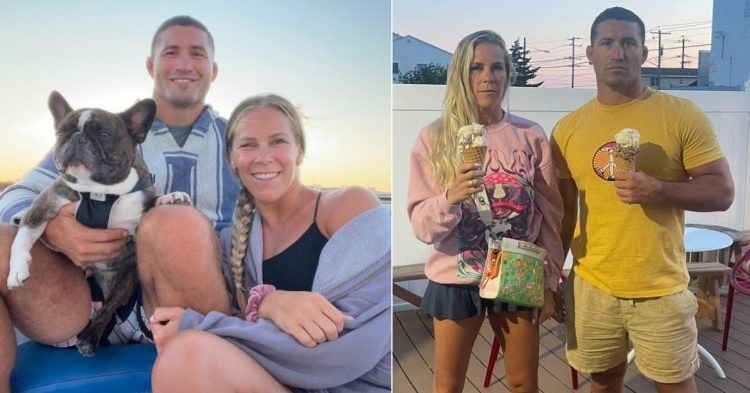 We have heard stories of fighters sacrificing everything in their pursuit to become UFC Champions. Fighters like Justin Gaethje have even admitted that they don’t have time to date and want to solely focus on their mixed martial arts career.

But not Katlyn Chookagian. Despite getting a second attempt at the title shot against Valentina Shevchenko, the UFC flyweight decided to let go of the opportunity for her marriage, and rightfully so.

In conversation with the UFC, Chookagian revealed how she got the offer to fight for the title belt. However, “getting married” was more important. And even though her husband advised her that they could postpone the marriage, however, Chookagian was in no mood of doing that, even if it meant passing on the title opportunity.

“My husband was like, ‘No, it’s a title shot, you have to get it. We could get married anytime.’ Okay, that’s coming from someone, the guy who didn’t plan the whole wedding. And I was like, ‘No, this is not possible, we are doing it now.’ You know, being the world champion is something I dreamed about my whole entire life, but also, I am a girl and getting married is important too.”

“Fighting is only a small period of your life, and this is the rest of my life. It was a hard decision, but I made it.” Katlyn Chookagian said.

Katlyn Chookagian is married to Kyle Cerminata. The couple tied the knot on September 8, 2019. Kyle is a wrestling coach and a real estate investor. He is a US Open and Pan AM Runner-Up and an NCAA D1 All-American wrestler.

Chookagian’s Instagram feed is filled with photos from her training sessions and the lovely time she spends with her husband. Wishing him on the first anniversary of their marriage, Chookagian expressed her interest in growing a family together, possibly hinting at wanting to have kids. They don’t have a child together, and the main reason could be Chookagian’s focus on her mixed martial arts journey.

At 33 years of age, it’s too soon to say Chookagian will hang up her gloves. However, one can’t be too sure. She has already fought for the flyweight title once and is ahead of a title eliminator against Manon Fiorot. Should she emerge vicariously at UFC 280, a title shot is guaranteed. It will be interesting to see what lies ahead of Katlyn Chookagian in her mixed martial arts journey as she takes the leap in her personal life.