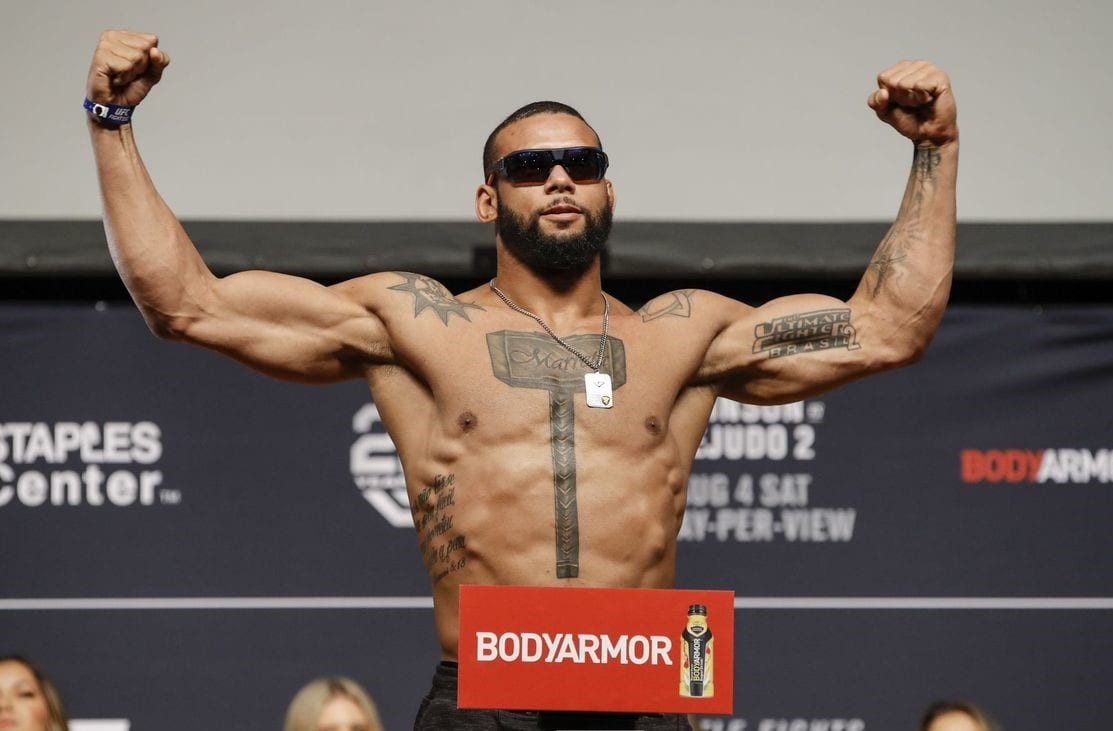 Jon Jones ruled the UFC light heavyweight division for over a decade until he decided to move up to the heavyweight division. Not a lot of fighters came close to beating Jon Jones inside the UFC octagon. But, Brazilian mixed martial artist, Thiago Santos made Jones look human in a highly competitive 5 round fight.

Thiago Santos fought Jon Jones in the main event of UFC 239 in the only title fight of his UFC career. Though Santos lost the fight against Jones he won a lot of credibility with his performance.

However, he has not been able to get back on a winning streak since the loss to Jon Jones.

This is not the first time, Santos has faced adversities in his UFC career and his fans will certainly expect him to put on an emphatic win against Johnny Walker in the main event of UFC Vegas 38.

There are a few things that stand out about Thiago Santos: his scary knockout power, a crazy tattoo on his chest, and his electric walkout song. Let’s take a look at the significance of Santos’ nickname and chest tattoo.

Why Thiago Santos is called Marreta?

The meaning of the Portuguese word Marreta means Sledgehammer. It is believed that Santos likes to call himself that because of his fighting style inside the octagon.

He is an excellent grappler with a Brazillian Jiu-Jitsu black belt. He is an impressive kickboxer. But, his knock-out power is something that troubles his opponents the most.

So far Santos has 30 pro MMA fights in his career. And 15 of his 21 wins have come through KO or TKOs. He has knock-out wins over some of the prominent UFC fighters such as Anthony Smith, Jack Hermansson, Jimi Manuwa, and the list goes on.

What is the significance of Thiago Santos’ tattos:

UFC light heavyweight, Thiago Santos has multiple tattoos on his body. But the one that catches the attention of the fans is the sledgehammer on his chest. The tattoo also has “Marreta” written on the head of the hammer.

Besides that, Santos has a tattoo on his right shoulder that looks like the logo of Soilwork, a Swedish death metal band. Now there is a difference between the band logo and the tattoo of Santos as the man in the circle holds a hammer instead of a blade. But it’s not confirmed whether Santos is a fan of the Swedish band.

Santos walks out to a song that is possibly made for him. He has been using the walkout song for a long time in UFC and it does not seem like the fans are going to watch him walk out to a different song in the future.