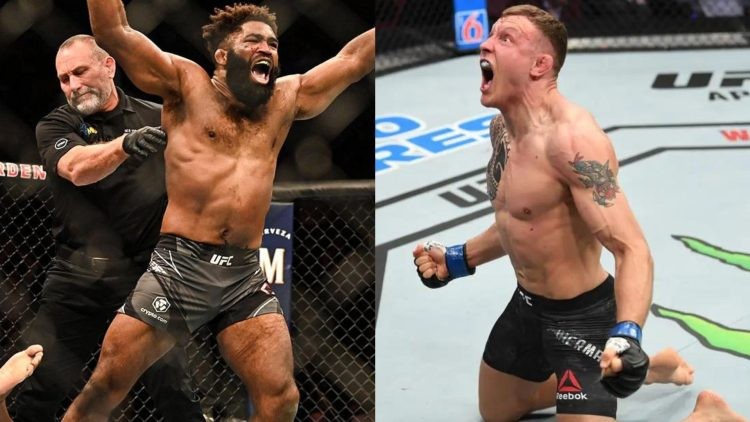 UFC London originally had a middleweight fight scheduled between Darren Till and Jack Hermansson. However, Till withdrew from the fight a few weeks ago.

A lot of fans will be disappointed at UFC London since Darren Till will not be making his return against Jack Hermansson. But, luckily Chris Curtis stepped in on short notice after Darren Till pulled out of the fight due to a knee injury.

Neverthless, Jack Hermansson vs Chris Curtis should be a fun matchup. The obvious way to victory for Hermansson is going to be take Curtis down and submit him. However, Chris Curtis is coming off a win against Rodolfo Vieira, who is an accomplished BJJ champion.

So who will come out victorious at UFC London? Can Hermansson get back on the winning streak?

Not so long ago, Hermansson was a top UFC middleweight contender. And many fans were even speculating how would a fight between him and the champion Israel Adesanya would play out.

Jack Hermansson was considered the best submission artist in the middleweight division a couple of years ago. However, over the time many opponents have exposed the gaps in his skillset, making him look beatable.

Jared Cannonier knocked out Jack Hermansson. Marvin Vettori nullified Hermansson’s ground game and beat him comfortably with his striking. Sean Strickland stopped the takedowns from Hermansson and had an easy night at office.

Needless to say that being the training partner for Sean Strickland will be a huge bonus for Chris Curtis going into this fight. Chris Curtis has good takedown defense and Jack Hermansson is not the strongest wrestler in the division.

So it’s very likely that Chris Churtis will stop most of the takedowns from Hermansson and inflict a lot of damage with his striking. If the fight goes to the ground, Hermansson will have success against Curtis. But, Curtis must have a huge long training camp focusing on grappling for Rodolfo Vieira. And that will come in handy in his next fight against Hermansson.

Even though Chris Curtis only has 3 wins in UFC he has a lot of MMA experience outside UFC with 29 wins and 8 losses. And he has only on submission loss. On the other hand, Hermansson has not been consistent in the last few years with 3 losses and 2 wins in his last 5 fights.