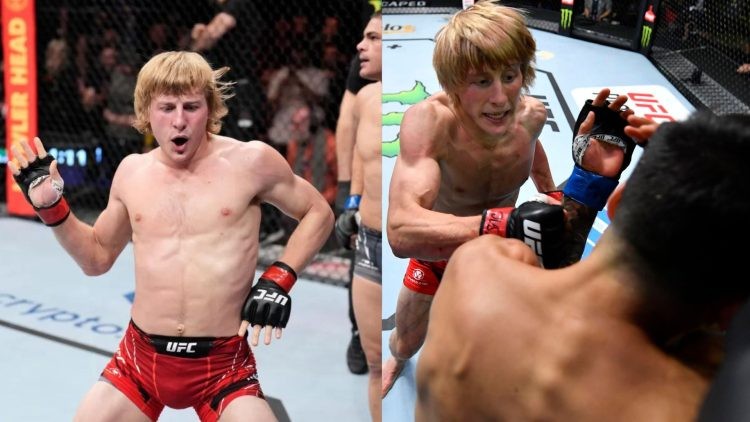 UFC London is stacked with some exciting fights including the lightweight fight between Paddy Pimblett and Jordan Leavitt. The rise of Paddy “The Baddy” Pimblett in UFC so far has been incredible.

With only two fights in UFC, Pimblett is already a star. The British mixed martial artist has a good resume outside of UFC as he was a two division champion in Cage Warriors. But, the level of opponents he is going to face in UFC is going to be a lot tougher.

And many fans believe Jordan Leavitt is the guy who will put an end to the streak of Paddy Pimblett and ruin the show for fans at UFC London.

Let’s have a look at both fighters’ resume, their skillsets and predict who is going to be victorious at UFC London.

Jordan Leavitt might be the toughest matchup for Paddy in his UFC career so far. But, it’s very unlikely that Leavitt will beat Pimblett at UFC London.

In the press conference, Jordan Leavitt explained that his grappling will be a huge factor in the fight. He also stated that anyone who has grappled with Pimblett has had a lot of success and beaten the British mixed martial artists.

However, Pimblett is a better grappler than Jordan Leavitt. It’s worth considering that Leavitt had a close split decision win against Trey Ogden in his last fight, which could have argubaly gone in favor of Ogden. His only career loss came when he took on Claudio Puelles, who is a strong grappler.

And it’s very likely that we will see a similar outcome in the fight between Paddy Pimblett vs Jordan Leavitt. But, Pimblett has better striking and the power to knock his opponents out.

Paddy has already said that he is not going to look for takedowns against Jordan Leavitt. So it won’t be surprise if Pimblett secures a TKO win over Jordan Leavitt, who is not as great as Pimblett when it comes to striking.

At the moment, Paddy might not the best lightweight in UFC but he certainly beats some of the guys in Top 10. And a win over Jordan Leavitt will set him up for a fight against a top 15 opponents, which will be an intriguing affair.