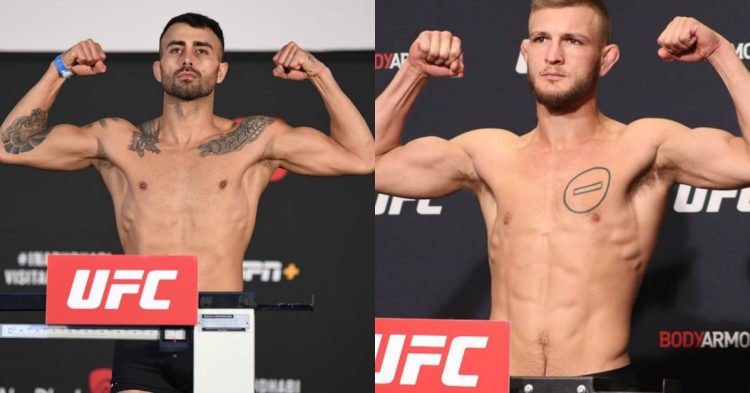 UFC London takes place this Saturday inside the O2 Arena. In the main event, top-ranked heavyweight fighters, Curtis Blaydes and Tom Aspinall will go head to head in a fight which will potentially determine the next title challenger. But not only that, other UK favourites such as Paddy Pimblett and Molly McCann will be fighting in the main card as well.

In the prelims of the event, Makwan Amirkhani will fight Jonathan Pearce in the featherweight division. Amirkhani beat Mike Grundy during his last outing which also came inside the O2 Arena in March of this year. It helped him break a 3-fight losing streak in the span of a year.

Jonathan Pearce on the other hand is riding on a 3-fight win streak. After his loss to Joe Lauzon on his main roster debut, Pearce went on to beat Kai Kamaka III, Omar Morales and Christian Rodriguez. He will be looking to keep the momentum going as Jonathan may break into the Top 15 of the featherweight division.

Makwan Amirkhani is a veteran UFC fighter. He first fought inside the Octagon in 2015 against Andy Ogle. In the last 7 years, he has fought 12 times in the UFC with 7 wins and 5 losses. He is a dominant grappler with 12 submissions. It shows how good Amirkhani is on the ground. Even his last win against Mike Grundy came via submission.

Fighting out of Tennessee, Jonathan Pearce has only had 4 fights inside the Octagon. His knockout win over Jacob Rosales at Dana White’s Contender Series got him the contract to fight in the UFC. Unlike Makwan, Jonathan is a slugger. He has 8 knockouts and only two submissions. However, one of those submissions came inside the Octagon in his 3rd UFC fight.

Pearce has so far been taken down 4 times inside the Octagon and possesses a takedown defence of 60%. But then again, he has also taken his opponents down 17 times so far in his 4 main roster fights with an accuracy of 58%. In terms of striking, Pearce puts up a very good average of 4.98 strikes per minute. But does consume 4.10 strikes at the same time as well.

But his striking defence will not be tested much against Amirkhani. The Iranian-born fighter only lands 1.36 strikes per minute while absorbing almost double that. Hence, Jonathan will have to focus much more on his grappling as Makwan averages 4.08 takedowns per fight. He also attempts 1.2 submissions per fight as well.

Hence, the way to victory for Pearce is very clear. He will have to keep the bout on the feet. Amirkhani has suffered 2 knockout losses in the last 3 years. So there are question marks over his chin. But the 33-year-old is also one of the most respected grapplers in the division. So an early takedown could prove fatal as well.

Jonathan Pearce is the younger fighter with a lot of momentum behind him. Plus, he has the grappling capabilities to fight off Makwan’s submission threat. So the American fighter will be the smart pick this weekend.