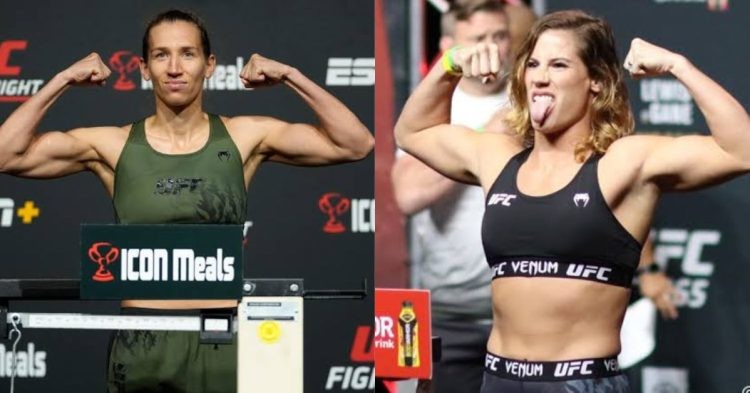 The highly awaited UFC London: Blaydes vs Aspinall will take place this weekend on July 23rd at the O2 Arena in London, United Kindom. This event features an exciting three rounds women’s flyweight matchup between Mandy Bohm and Victoria Leonardo that is scheduled in the prelims.

Both Leonardo and Many are making their octagon return after almost one year and it will be interesting to see how they fare after taking such a long layoff from the sport. Fury who had made her UFC debut in 2021 has failed to win both her fights after earning the contract with a win in the DWCS.

On the other hand, her opponent Many Bohm also didn’t have the best of debuts as she suffered a beatdown and lost the match-up via unanimous decision. With both fighters winless, there will be a lot at stake as a loss would put them down in the pecking order and put their UFC career in jeopardy.

Before breaking down the styles of the two women flyweight fighters that will square off against each other at UFC London, let’s compare their records, height and reach.

Going into UFC London: Blaydes vs Aspinall, Mandy Bohm will have a sizable advantage over her opponent Victoria Leonardo. Because there is a significant difference in their height and reach, with Mandy having a seven-inch reach advantage, it will be easier for her to stay afar and strike.

Both these fighters have not fought a lot inside the UFC octagon but if we compare their stats from the recent fights, then Victoria is the more accurate striker with higher output. However, she tends to take a lot of risks and absorb a lot of damage and resulting of that Leonardo has been knocked out in her last two fights.

With the physical disadvantage, Victoria Leonardo has to test Bohm’s ground game because the latter faced a lot of problems in the clinch in her UFC debut. However, if she fails to gain control on the ground then one can expect Mandy Bohm to dominate this matchup.