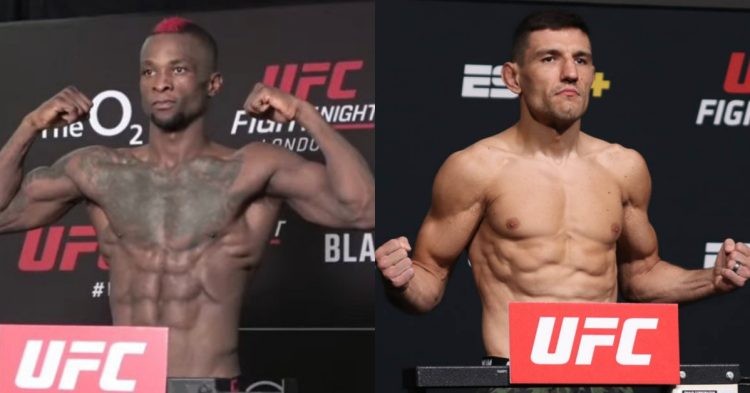 Lightweight fighters Marc Diakiese will go head to head against Damir Hadzovic inside the Octagon. The bout will be a part of the prelims of UFC London this Saturday. The event will feature the heavyweight bout between Curtis Blaydes and Tom Aspinall in the main event. It will also feature the return of Alexander Gustafsson and Paddy Pimblett on the main card.

Marc Diakiese started his journey with the UFC in 2016. Although he won his first 3 bouts in the promotion, Diakiese went on to lose his next 3 UFC fights. He has always been inconsistent in the company. But nonetheless, Marc won his last fight against Viacheslav Borschev in March of this year.

Much like Marc Diakiese, Damir Hadzovic also started his partnership with the UFC in 2016. He holds a record of 4-4 in the company. Before beating Yancy Medeiros in his last fight, Hadzovic lost two back-to-back fights against Christos Giagos and Renato Moicano.

So who will come out as the winner in a 155lbs bout between Marc Diakiese and Damir Hadzovic? Let’s take a dive into their stats and see how the bout may play out.

Nicknamed ‘Bonecrusher,’ Marc Diakiese is a great striker with 6 knockout wins in his career. Although he does have 1 submission under his belt, Marc’s striking is his best tool. But, with 3.17 takedowns per fight, his grappling is nothing to sneeze at either. On the feet, he lands at 2.84 strikes per minute. However, Marc also absorbs an average of 2.56 strikes per minute.

He will need to rely upon his takedowns much more than his stand-up game against Damir Hadzovic. Hadzovic lands 3.92 strikes per minute while absorbing 3.70 strikes per minute. So it is not surprising that he holds 7 KO wins in his career. Although he only has a 37% takedown defence in his career, Damir has 3 submissions.

Hence, it is a very even fight on paper. Although Hadzovic will be the more active fighter on the feet, Marc has a great amount of power behind his punches. In terms of grappling, both fighters have been finished on the ground in the UFC previously. As a result, both will have their moments to shine on the mat. The bout may go the distance and the more active fighter may walk away with the decision.

But Damir Hadzovic has not stepped inside the Octagon for a long period of time. He is currently 35 years old and a long break between fights may not be ideal for him. Marc Diakiese is only 29 and he has been much more active. On top of that, he will have a height advantage and a big reach advantage. By the looks of it, Diakiese will be the smart pick for this Saturday.