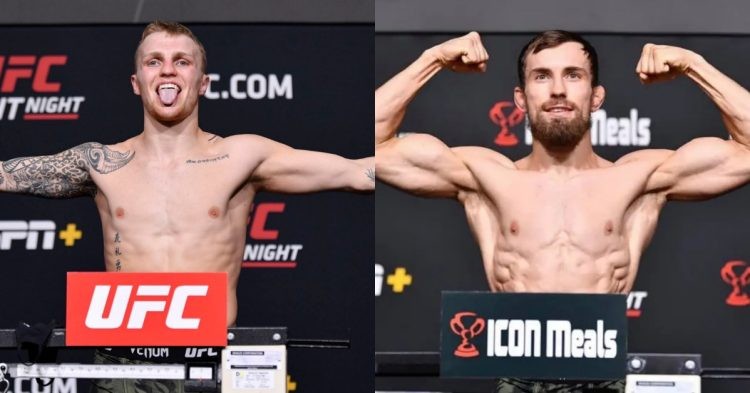 Mason Jones will fight Ludovit Klein in the prelims of the upcoming UFC London this weekend. The lightweight contest will be a featured bout in the prelims. Neither Jones nor Klein is ranked in the 155lbs division at the moment. But winning on Saturday will certainly be a step towards being ranked for both of them.

Born in Wales, Mason Jones was the former two-weight Cage Warriors champion. He became the lightweight and the welterweight champion in his last two fights in the promotion. The lightweight prospect was unbeaten upon his entry into the UFC. But lost his first UFC fight against Mike Davis.

However, he bounced back against David Onama in the following fight and got the win by unanimous decision. Jones will fight Ludovit Klein next. Klein won his last fight against Devonte Smith at UFC 272. With the win, he snapped his two-fight losing skid following his debut win over Shane Young at UFC 253.

Mason Jones is great on his feet and on the ground. He currently holds 4 knockout and 3 submission wins under his belt. Hence, he is a problem for his opponents both in striking and in grappling. Jones lands at a rate of 6.71 strikes per minute while absorbing 5.59 strikes at the same time. It just goes to prove how risky of a game he plays.

But he also has the grappling skills to not get into brawls. Mason lands 4.43 takedowns per fight with an accuracy rate of 52%. It will come in handy against Ludovit Klein. Although Klein possesses a takedown defence of 80%, he was taken down by Nate Landwehr and submitted. Hence, it will be the game plan to follow if Mason wants to take Ludovit down.

But the UK fighter will also have a great advantage on the feet as well. Klein only lands 3.58 strikes per minute and absorbs 4.22 strikers in return. Judging by the numbers, Jones will be the clear favourite to win over Ludovit Klein. Although Klein may get an upset win, Mason Jones will still be the smart pick this weekend.