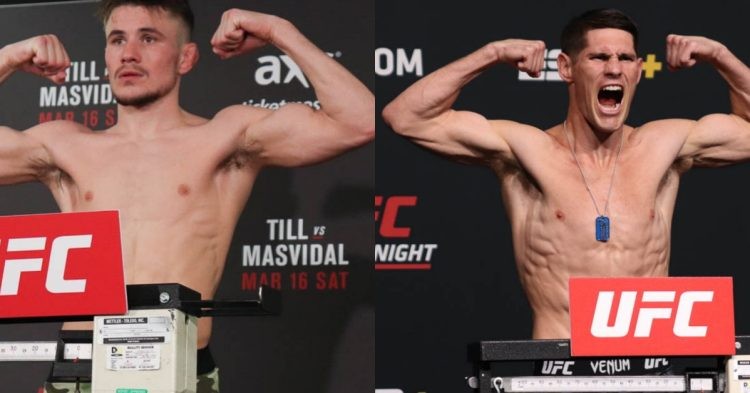 Nathaniel Wood vs Charles Rosa will go down this weekend. Rosa and Wood will fight in the prelims of UFC London on July 23rd. The event is set to take place in the O2 Arena and it will feature Tom Aspinall vs Curtis Blaydes in the main event. Rising UFC Lightweight star Paddy Pimblett will be on the card too.

Nicknamed ‘The Prospect,’ Nathaniel Wood will be making his return after an absence of 2 years. He won 3 successive bouts against Johnny Eduardo, Andre Ewell and José Alberto Quiñónez upon his UFC debut. However, he has lost 2 fights since then and won only 1. He lost to Casey Kenney in his last fight in 2020.

Charles Rosa is one of the most entertaining fighters to watch in the UFC featherweight division. He is known for his grit and heart inside the Octagon. 4 post-fight bonuses so far will prove how tough of a fighter he really is.

Unfortunately for him, his toughness did not really have a positive impact on his record. Rosa has a record of 5-7 inside the Octagon and is currently on a 2-fight losing skid.

Nathaniel Wood is a dominant finisher. Out of his 17 wins, only 3 went to the judges’ cards. He has 9 knockouts and 5 submissions. The Brit has a very high output rate with 6.28 strikes per minute.

But he also absorbs over 4 strikes per minute as well. He averages 1.29 takedowns per fight as well. It proves how well-rounded he really is. The 28-year-old also has a great takedown defence of 75%.

That will come in handy against someone like Rosa who is a good grappler. Charles Rosa averages 1.64 takedowns per fight. He has 8 submissions in his career so far. So Wood will have to be careful in grappling exchanges with Rosa. But Nathaniel will have a huge advantage on the feet.

Charles Rosa absorbs 3.62 strikes per minute while just landing 3.05 strikes in the same period. Rosa will need to look for a takedown very early on in the fight. Otherwise Wood will definitely punish him on the feet in a brutal fashion.

Rosa also does have a great deal of power behind his punches. So there can be a scenario where they are exchanging in a pocket and at that point, it is only a matter of who lands the better punch.

But the smart pick will be Nathaniel Wood as he is the fresher and the younger fighter. With the crowd behind him, Wood may prove too much to handle for the 35-year-old.