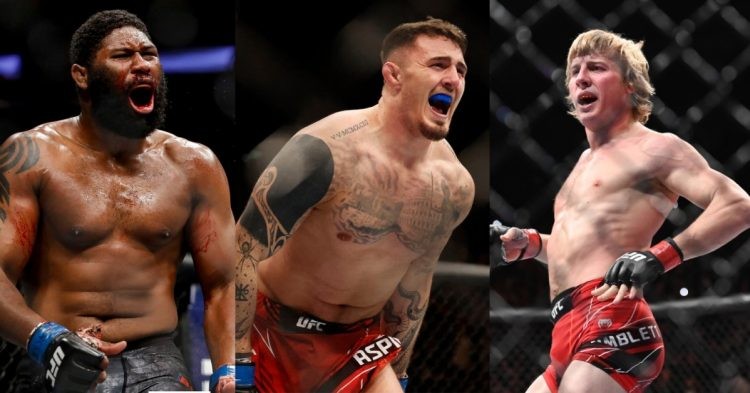 UFC is back in the United Kingdom for the second time this year with yet another exciting fight card that is sure to deliver violence. UFC London: Blaydes vs Aspinall will begin with its proceedings this weekend on July 23rd at the O2 Arena in London.

Heavyweight rising star Tom Aspinall will headline this event as he goes against Curtis Blaydes in a five-round bout. After submitting Alexander Volkov in his last fight that took place in the O2 Arena, the British contender will look to deliver something special once again to close out the show and maintain his undefeated streak.

Swedish middleweight Jack Hermansson will feature in a three round bout against Chris Curtis that will take place in the co-main event. Originally, Hermansson was scheduled to fight Darren Till on this card. But Till had to pull out from the fight due to an injury and thereafter Curtis accepted to replace him on short notice.

Crowd favourite Paddy Pimblett will also be in action as he squares off against Jordan Leavitt in a three-round bout on the main card of UFC London. As we move ahead let’s take a look at the walkout songs of all the main card fighters.

Which walkout songs will Curtis Blaydes and Tom Aspinall use at UFC London?

Heavyweight contender Curtis Blaydes has competed in 15 fights in the UFC octagon and in most of his fights he has walked out to the tunes of Immortal’s hit song Encounter the ultimate. However, he changed his entrance song for his recent fight against Chris Daukaus.

Blaydes used the popular console game Mortal Kombat’s theme song for his walkout. Unless Curtis has something special planned for his walkout we could see him go back to his old entrance song Encounter for this main event clash against Aspinall.

His opponent, Tom Aspinall has risen to the top six rankings of the heavyweight division in just five fights. For all his fights in the UFC so far, The British heavyweight has walked out the 1970s hit song “Move on Up” by Curtis Mayfield. Therefore the likelihood of him using the same song for his upcoming fight is very high.

Lightweight star Paddy Pimblett is all set to compete in front of his home-crowd once again at UFC London on July 23rd. So far Paddy the Baddy has impressed everyone with his showmanship and combat skills inside the octagon.

With walkouts being an integral part of the showmanship in UFC, Pimblett has a combination of songs that he usually uses for his fights. The 27-year-old lightweight walks out to the mix of “Lethal Industry” by Sunnary James and Ryan Maraciano and “Heads Will Roll” by Yeah Yeah Yeahs (A Trak Remix).

He has used this remix for all his fights and we can expect the same song to hit when Paddy steps inside the octagon at UFC London. Pimblett’s teammate and another home crowd favourite Molly McCann will also be in action and feature on the main card of UFC London.

Unlike Paddy, McCann likes to mix it up with her walkout songs and consequently, she has made her way to the octagon with a different type of music in every UFC fight. Molly has walked out to the indie song “The Place” by Jamie Webster for her fight against Ji Yeon Kim and had switched it up by walking out to viral rap song “Just Dre” by Dr Dre.

With that being said, it would be fascinating to see which song will Molly McCann choose for her walkout as she steps inside the octagon to go against Hannah Goldy.