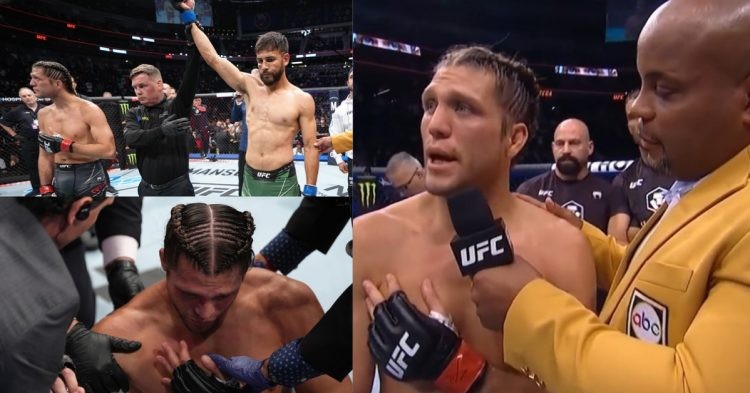 Brian Ortega returned to action after a long absence of ten months to collide against Yair Rodriguez in a five-round main event clash at UFC Long Island. Going into this fight, both the fighters were coming off losses.

T-City suffered a tough unanimous decision loss to Alexander Volkanovski in their title fight. Similarly, his opponent El Pantera lost his last bout via unanimous decision as he was outclassed by Max Holloway on all fronts throughout the five rounds.

However, despite losing their last fight, the winner of this featherweight matchup could possibly earn a title shot against Alexander Volkanovski. It is needless to say that this main event clash was the one that fans were the most excited about as two of the most lethal featherweight fighters squared off against each other.

However, the fight ended in an anti-climatic manner as Ortega’s dislocated his shoulder while escaping from Yair’s armbar submission attempt late in the first round and consequently, Rodriguez won this bout via TKO. This matchup was extremely close as both Yair and Brian traded some good blows on the standup.

The Mexican featherweight landed some good combinations with the help of his quick hands and dominated the first round to a certain extent. Later in the round, T-City took Rodriguez down and tried to control him on the ground. Unfortunately, Ortega injured his right shoulder which resulted in an abrupt loss.

After Brian Ortega suffered an unfortunate shoulder injury in the final minute of the first round against Yair Rodriguez, the referee decided to stop the fight and the Mexican featherweight won this fight via stoppage.

It is needless to say that this was very frustrating for T-City who made his return inside the octagon after ten months. Consequently, in the post-fight interview,  Brian Ortega expressed his disappointment after losing in a terrible manner.

“Yair, congratulations, but let’s do this right.”

“I want both of us to leave it all in here.”

“I don’t know how this happened I wanted to keep going and this thing came out. As you can tell I got two shoulder surgeries already and I might need a third one who knows. But the fight was going good everything that we planned was going and we got him down to the ground.”

“We got stuck in a situation and his body was tight mounted and I don’t know it just yanked. I was not in submission danger so I felt good, I tried to clear my leg and my arm just popped out.”

After explaining in detail what went wrong for him in this matchup, Ortega asked Yair for a rematch if he does not gets a title shot next. However, before getting his wish of a rematch, T-City would have to check whether he has to undergo another surgery. If not we can expect him to make a comeback very soon.