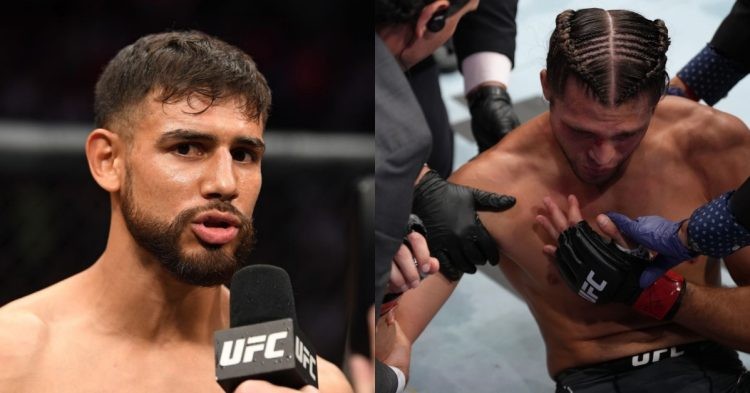 The no. 2 and no. 3 ranked UFC featherweight fighters just went at it inside the Octagon. Brain Ortega took on Yair Rodriguez in the main event of UFC Long Island. The winner of this bout would potentially go on to fight the champ Alexander Volkanovski. So, who came out on top in a fight between Ortega and Rodriguez? Let’s find out.

Both fighters started the bout on the front foot. It resulted in both Brian and Yair getting tagged pretty early on. Although Ortega tried to pressure Rodriguez back to the fence, Yair just kept on firing punches and kicks without any hesitation. But it allowed Ortega the opportunity to duck the shot and engage Ortega in a clinch.

However, Ortega found it very difficult to take El Pantera down and Yair ultimately found his way out of the clinch. But just when it seemed like the bout was heating up, an unfortunate injury ended the bout. It looked like the accident took place during a scramble on the ground.

Yair Rodriguez takes the win in the first-round but an unfortunate way to end a much anticipated fight.#UFCLongIsland pic.twitter.com/uGBO0wNIyJ

Ortega had managed to land the very first takedown of the fight. But Rodriguez seemed to be able to roll into a position to lock in an armbar. But while Yair was trying to put himself in the position to lock in the submission, his feet pushed Ortega’s shoulder in such a way that it was dislocated. As a result, Rodriguez got the win as Ortega was unable to continue.

Yair Rodriguez is open to a rematch against Brian Ortega

It was certainly not the ideal outcome to what could have been a great fight. Both Yair and Brian seemed to be at the top of their game in the Octagon. Ortega even managed to bust Rodriguez up within the opening minutes of the bout. However, the freak injury resulted in the fight being stopped prematurely.

In the post-fight interview with Daniel Cormier inside the Octagon, Yair sounded disheartened with the way things panned out. T-City and Rodriguez are friends in real life. Hence the 29-year-old certainly felt bad for Ortega. He even promised to run the fight back whenever Ortega heals up. Rodriguez wants the bout to take place for the belt in future.

“It’s unfortunate, I told him we can run it back any time.”

“I’m sorry this happened, it’s part of the game.”

All class from Yair Rodriguez after Brian Ortega’s injury at #UFCLongIsland pic.twitter.com/p2fLV7uPDr

“I already told him, ‘you know, we can run it back any time. We can do this you know.’ but I’ll rather do this for a championship instead of when into situation like this. But whatever the UFC decides, I’m okay with whatever. It’s unfortunate bro, I don’t know what to say.”

He then went on to call out the divisional champion Alexander Volkanovski. He stated that although he did not have respect for the champ previously, he now has a great deal of admiration for him.

Do you think UFC will run back the fight between Brian Ortega and Yair Rodriguez instantly? Or will Yair get the next title shot? Let us know in the comments down below.