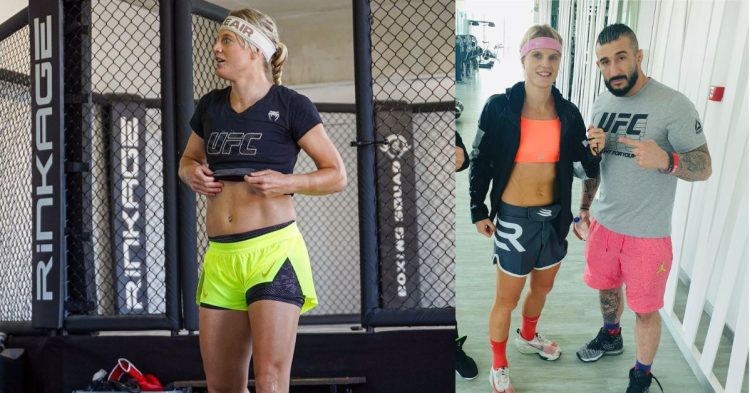 Manon Fiorot is one of the rising female fighters in the UFC. She competes in the Flyweight division and ranks among the Top 20 in the division. Fiorot is scheduled to face Katlyn Chookagian at UFC 280, which takes place at Etihad Arena in Abu Dhabi, UAE.

‘The Beast’ earned a lot of fans during her amateur fighting career in the Extreme Fighting Championship’s reality series, The Fighter. She also won the show’s championship. After that, she made her UFC debut against Victoria Leonardo at UFC on ESPN: Chiesa vs. Magny, and won the fight by TKO.

Fiorot is undefeated in the UFC and her last win came over Jennifer Maia. ‘The Beast’ was set to fight Jéssica Andrade at UFC Fight Night: Gane vs. Tuivasa. But the bout was canceled later. Fiorot’s biggest fight will be at UFC 280, this weekend and a win over Chookagian will surely put her on the Top 10 women’s list.

Fiorot has picked up a lot of fans and has about 30.3K followers on Instagram. Fiorot often shares posts of herself exploring new places and can be seen hanging out with her trainer, Aldric Cassata on social media. But Manon is assumed to be unmarried as of 2022. Let’s learn more about Fiorot’s private and dating life.

According to some sources, Fiorot has been in a relationship with her head coach, Aldric Cassata. He teaches mixed martial arts and Brazilian jiu-jitsu at Boxing Squad. It is to be assumed that Cassata will corner Fiorot for her fight at UFC 280.

Fiorot is secretive about her private life and hasn’t opened up much about her relationship. However, on one occasion, Fiorot revealed her coach was her fiancé in her interview. So, the pair might have engaged in a private ceremony.

Aldric often shares Fiorot’s fighting accomplishments on his social media. He has also been seen accompanying Fiorot in her fights. Moreover, Aldric has also appeared in some of Manon’s YouTube videos.

Aldric Cassata is a former professional MMA Fighter out of Nice, France. He has a record of 10 wins, 5 losses, and 2 No Contest and used to compete in the welterweight division. Cassata hasn’t been active in the sport since 2015, and currently is a trainer at Boxing Squad.

Cassata last fought Jaouad El Byari in Luctor Cage Fight – Luctor Impetus back in 2015. He won this bout via submission in the 1st round. He has also competed in a variety of promotions like Cage Warriors Fighting Championship 65, Cage Gladiators, Underdog MMA Fight Challenge, Kempo Masters, Ultra Fight Kempokan and more.

Just like Cassata, Fiorot often posts pictures of her hanging out and training with her coach on Instagram. Regardless, the couple has not officially talked about their relationship. Fans are eagerly waiting for Manon to reveal more about her personal life.