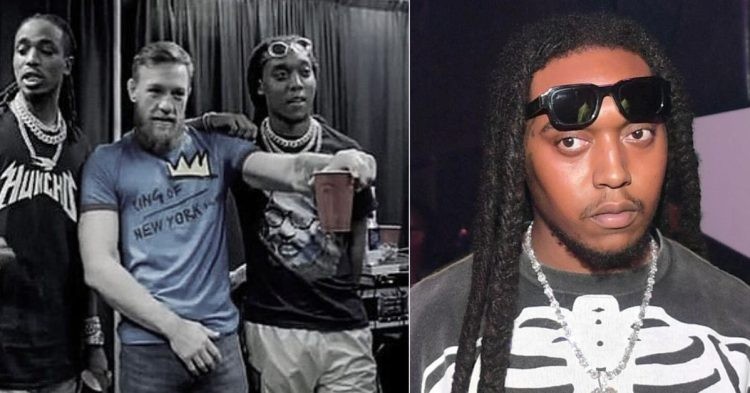 Conor McGregor is undoubtedly one of the biggest stars in the history of combat sports. After winning the lightweight title against Eddie Alvarez, McGregor went on to box the greatest boxer of this generation, Floyd Mayweather in a pro boxing fight.

Not just mixed martial arts but Conor McGregor excelled in business with his multiple ventures such as Proper 12 Irish Whiskey. He is also going to make his Hollywood debut in the reboot of Roadhouse. With all the fame from years of fighting, Conor McGregor has been able to interact with some of the biggest entertainers in the world including Johnny Depp, Jared Leto, Arnold Schwarzenegger, and the list goes on.

A similar celebrity interaction took place when McGregor attended a concert by Migos after his infamous loss to Khabib Nurmagomedov at UFC 229.

Conor McGregor met Quavo, Offset, and Takeoff in 2018 after his embarrassing loss to Khabib Nurmagomedov. It was one of the biggest fights in UFC history and McGregor suffered a devastating submission loss and failed to capture the UFC lightweight title.

Following the loss, McGregor met the members of Migos (Quavo, Takeoff, and Offset) after the concert and shared a heartwarming moment.

Conor McGregor offered the members of Migos a bottle of Proper 12 Irish Whiskey. In return, Quavo and Offset gave Conor McGregor a diamond chain, which was certainly appreciated by the Notorious.

This was not the only time McGregor met Migos. The former UFC champion was spotted sparring with the member of Quavos from Migos in a recording studio in Dublin. Conor McGregor shared some pleasant moments with Migos and he will certainly be saddened after the tragic death of Takeoff.

Friend of Conor McGregor and Migos’ Member Takeoff Dies at 28

A lot has changed since then as the youngest member of Migos, Takeoff recently died in Houston. The American rapper Takeoff suffered a tragic death on Tuesday at 810 Billiards & Bowling Houston. The Migos rapper was playing dice with his uncle and band member, Quavo when he became the victim of a heinous crime.

The 28-year-old rapper, Takeoff had done some impressive work in the music industry. And his death has saddened many celebrities including C. Roy, Jake Paul, and Hasan Piker, who took to Twitter to express their grief.

Conor McGregor has not reacted to the demise of his friend Takeoff. However, many fans have come out to show support for Migos after the death of its youngest member.