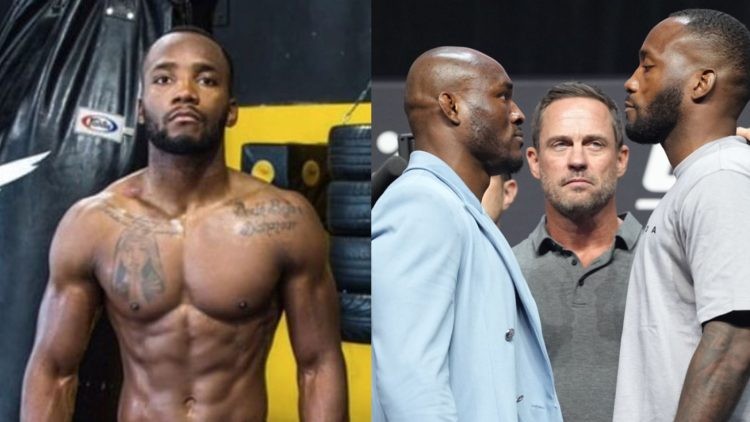 Leon Edwards will finally have the chance to dethrone the welterweight champ Kamaru Usman and win the UFC welterweight title this coming Saturday at UFC 278 in Salt Lake City, Utah. They will be meeting in the octagon for the second time since 2015.

Ahead of UFC 278, BT Sport released a documentary featuring Leon Edwards and the struggles he had to go through in his childhood.

Edwards stated that he heard gunfire daily around the neighborhood back in his hometown, Kingston, Jamaica. He saw the shooting, violence, and deaths. It was like a warzone to him; many people he knew died often by guns at a very young age.

After moving to England, with his mother and brother, Fabian, Leon saw his life change somewhat. He didn’t even know what MMA was then. His father stayed in London and after he bought a house, he called for Leon and the rest of the family to settle in England.

‘Rocky’ said his life changed when his mother urged him to join an MMA gym when he was about 17 years old. He was naturally good at the sport and the coaches thought that he was somewhat special. Leon realized that he could make a good career out of MMA.

“My mom could barely afford to pay membership fees, but somehow she made it work.”

Edwards was training two to three times per day, seven days a week. As they had financial issues, after a few months, he asked the gym manager if he could work there as a coach for the younger kids so that he would not have to pay his fees and the manager agreed.

“Without MMA, I don’t know what would have become of me. It was a difficult, hard, dangerous life.” Leon said when asked about MMA changing his life.

Edwards had his first amateur fight after eight months into training. The passion grew within him and he got very good at it. He won four fights in one day and also won a tournament at the gym.

In 2014, Leon won the BAMMA welterweight title in London, and it was later that year Edwards signed with the UFC as a professional fighter.

Who was Leon Edwards’ father?

Along with his mother and brother, Fabian, Leon moved to Birmingham, England, when he was 9. But their home was in a crime-infested area and there were gang wars and violence all around. He stated that his father was the leader of a gang.

“When I was 14, my father was murdered,” he said. “He was shot and killed at a nightclub in London. It was something to do with money.”

When he was about 14 years old, his father was shot dead at a nightclub in London. Edwards doesn’t know the exact details but he remembers that it had something to do with money.

Shortly after, Edwards too joined a gang. He stated that he joined the gang because he had no other choice. He also got arrested several times for many criminal activities.

His crew was involved in street fights, robberies, drugs, and stabbings. If it wasn’t for MMA, his life would’ve been the same as another gang member without any hope and ambition in life.

What do we know about Fabian Edwards, brother of Leon Edwards?

Fabian Edwards is the younger brother of Leon Edwards. Like Leon, Fabian is also a professional mixed martial artist who competes in the middleweight division of Bellator MMA.

‘The Assassin’ began his amateur MMA career in July 2015. He followed in the footsteps of his big brother and joined MMA to escape crime and the life of a gang member.

His first fight was what defined him as a fighter and an entertainer. In just four seconds of the fight, Fabian won via TKO. He began his professional career under Bellator MMA.

It is truly an amazing thing to have achieved what they have able to achieve especially with such troubled childhoods. Leon said he is very proud of his brother and supports him wholeheartedly for what he is doing.

Edwards is a different man now who has survived and grown through all that violence and nightmares of childhood. Despite all the childhood troubles, Leon seems to have become a calm and even-tempered man both in and outside the Octagon. He has won 9 times in a row since his defeat to Usman and is now considered one of the world’s great martial artists.