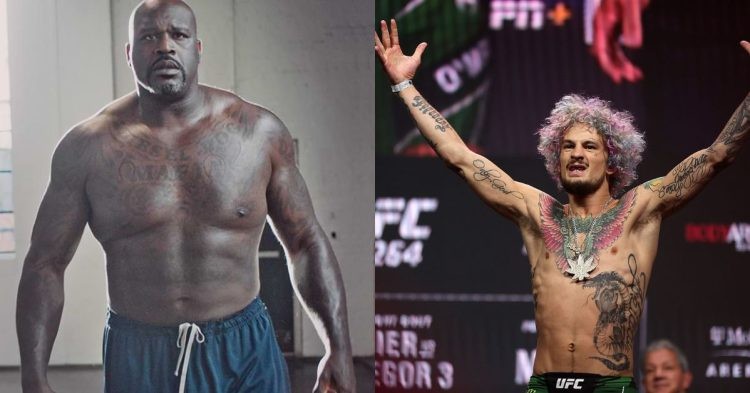 Recently, UFC’s rising star prospect ‘Suga’ Sean O’Malley was spotted having fun time at an NBA game. He seemed to find himself surrounded by quite the company. Sean was spotted hanging out with the likes of  former four time NBA Champ Shaquille O’Neal, a legend in the world of comedy, Steve Harvey, and Indian Actor Ranveer Singh. O’Malley posted the picutres he took in an Instagram post with the caption “Abu Dhabi has been awesome. Can’t wait to beat up Peter.”

The caption makes a reference to his upcoming bout which is the biggest fight of O’Malley’s career so far. He would be going against the recently dethroned champ, and the former interim champ Petr Yan, who is one of the best strikers in the division.

‘Suga’ has been in frequent contact with the NBA legend these days as they’ve motivated each other on twitter frequently. The former jokingly calling the latter of shared Irish ancestry as they both share the style of writing their last name. In a recent video, O’Malley was spotted having a pleasant conversation with the legend himself, where the latter promised to support O’Malley at UFC 280.

‘Shaq’ has recently gone through a complete body transformation in which he’s gone from someone being on the bigger side to a seven foot tall hunk built of muscle. When asked about the same, the legend bizarrely quoted him wanting to become a sex symbol as the reason.

“It’s like a blessing and a curse(O’Malley talking about Shaq’a physique). He just seemed like he hurts from playing all those years of basketball being that MASSIVE”

O’Malley himself is on the way to becoming a something of a star as he’s just entered the rankings and has already garnered around 2.5 million followers on Instagram. He even expressed his desire to become a star as he believes that there’s a void that’s been left open by the UFC megastar Conor Mc’Gregor. O’Mally quoted:

“I’d say people are hoping I don’t win, but to be honest, I would say the majority of people that think I won’t win actually want me to win. People want a superstar. There’s really no one in the UFC right now that is that Conor level. Me, I go out there and beat Petr in spectacular fashion, I’m climbing. I’m not going to be there yet and I know that, but I’m climbing to become that guy. I want to be the Conor.”

We’ll see how the biggest fight of the Bantamweight prospect’s career plays at UFC 280.