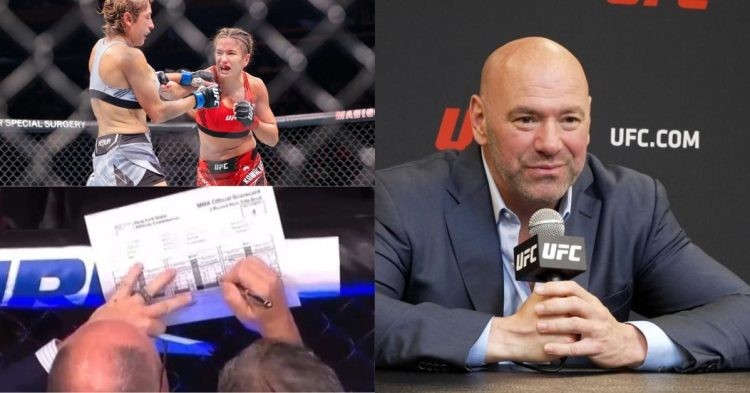 In UFC 281 we saw some confusion in the scorecards during the early prelim fight between Karolina Kowalkiewicz and Silvana Gomez Juarez. UFC president Dana White was shocked to see the scorecard debacle that happened after the fight.

During the UFC 281 post fight press conference, Dana White talked about the controversial moment and stated:

“Oh I forgot about that actually have you ever seen anything like that ever,” Dana asked the reporter. “I don’t know what happened man, I was like 20-some years I’ve never seen this”

In the early prelims of UFC 281, Karolina Kowalkiewicz, the former UFC title contender, competed against Silvana Gomez. The confusion arrived when a commissioner from New York State Athletic Commission entered the octagon. After discussion, they changed the judges’ scorecard before Bruce Buffer read it.

Everyone was bewildered at this point. The audience, UFC commentators, and Bruce Buffer—who was about to read a new scorecard in front of an uninformed.

When the teacher says pencils down ✏️ #UFC281 pic.twitter.com/n4gx5nc2vL

The UFC returned to Madison Square Garden with a massive title fight on one of the most loaded events of the year. Alex Pereira challenged the champion Israel Adesanya for the middleweight title in the main event of UFC 281. In contrast, UFC had veteran Carla Esparza defend her strawweight championship against Zhang Weili and a three-rounded slugfest between lightweights Dustin Poirier and Michael Chandler.

Many people were rather surprised to see this act of drama in the octagon. Former two-division champion and UFC commentator Daniel Cormier said “Oh my god they are flipping the scorecards. I have never seen this in my life. Somebody is going to be really mad”.

Other UFC fighters also reacted to this by asking the reason, why the scorecard was being edited inside the cage prior to the decision. Kowalkiewicz now has back-to-back wins after suffering five straight losses between 2018 and 2021.