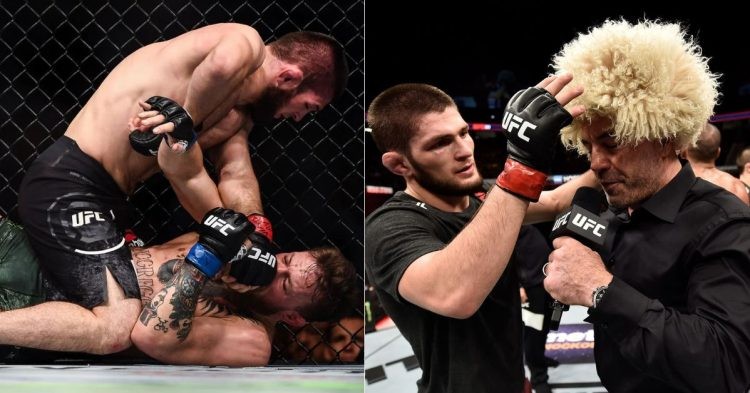 The Eagle seemingly dominated McGregor during their title fight back at UFC 229, picking up a fourth-round submission win to retain the lightweight gold. During the course of the fight, it won’t be wrong to say that there were moments when Nurmagomedov absolutely annihilated McGregor on the ground. Sitting on the commentary table, Joe Rogan opined how Conor was getting “smashed”.

Taking “offense” at those remarks, Conor McGregor hit back at Joe Rogan and on top of that, lauded the illegal knee he landed on Khabib during the second round. “Illegal knee on the ground by Conor.”

This is not the first time that Conor McGregor has admitted that he landed an illegal knee on Khabib Nurmagomedov. Back in 2020, the Notorious called the illegal knee a “never before seen shot”.

In a recent audio clip shared on Twitter, McGregor ridiculed Joe Rogan for his commentary and laughed off his illegal shot at Khabib.

@joerogan proper Twelve blow the jaw off you stick to that other gick boondock head pic.twitter.com/7UkBU6abnf

“What are you talking about smashing this and smashing that? I was smashing me knee into his fuc***g eyesocket.” He said. “That’s a knee to the grounded opponent. Call the cops.” McGregor further added.

The rant did not stop here as the Notorious used his fight against Donald Cerrone as an example of what it means to be smashed in his dictionary.

That’s smashed up pal. @joerogan. You ever see me like that? Never. pic.twitter.com/8cMxJKKQcK

Recently, Conor McGregor called out Khabib Nurmagomedov for a rematch and claimed that the Eagle ran away because of the fear of defeat. The former Champion went even further, naming the illegal shot to the head. “I’m the goat of unseen shots.” He said.

I call this knee strike “the springbok” Remember reebok? Ye well this is springbok. You ever see a springbok jump? Well just have a look at that knee springbok into this eye sock hahahaja I’m the goat of unseen shots.
That’s without question.
God bless the dead. https://t.co/usFrX7lUe7

There doesn’t seem to be any end to the rivalry between Conor McGregor and Khabib Nurmagomedov and even after four years, both fighters never miss a chance to take a jibe at each other.