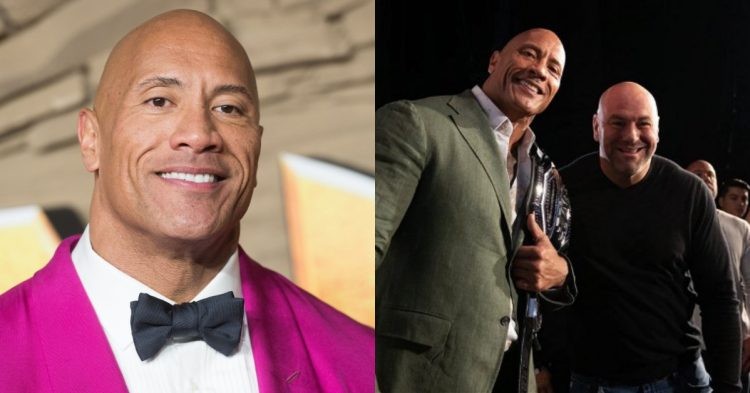 In January of 2022, The Rock and UFC struck a sponsorship deal which would see the fighters wear ‘Project Rock’ shoes. Recently, Dwayne Johnson released a video which saw fighters such as Francis Ngannou, Colby Covington and Jorge Masvidal praising the footwear company for making comfortable shoes.

Not only that, but the fighters also appreciated that The Rock has chosen to involve himself in the sport directly. So things are looking bright for all the parties, right? According to a recent report, that may not be the case. Famous combat sports journalist John S. Nash tweeted that fighters are not benefitting from the deal in the slightest!

He put out a tweet which stated that the company is apparently mandating that the fighters have to do interviews with The Rock’s Seven Bucks Productions. That may explain why almost all the biggest fighters in the UFC appeared in the promotional video for the brand.

Asked around and not only are fighters not going to get paid anything to wear the shoes, the UFC is apparently requiring fighters do interviews with Johnson’s media company Seven Bucks.

Erik Magraken, a combat sports lawyer, also gave his thoughts on the matter. He pointed out that the financial details have been purposefully left out because fighters are making no money from the deal, whereas UFC is making a boatload.

How much the UFC is pocketing. And how much goes to the fighters forced to wear the shoes.

Seems the answer is

How much money are UFC fighters making from the sponsorship deals?

For the longest time, MMA was not considered a mainstream sport. Because of the violence involved, major companies shied away from sponsoring the fighters and having their name associated with the sport. However, UFC changed it in 2014 as they signed a $70 million deal with Reebok which ran from 2015-2021.

But the deal only benefitted the company. Not only did they earn an insane amount from Reebok, but the deal also drove up merchandise sales. The deal certainly allowed the company to give a more professional outlook to their brand. But, no longer were the fighters allowed to bring in their own sponsors to the Octagon. It made the fighters lose a lot of side income.

In some cases, the fighters missed out on sponsorship money in six figures. Instead, they had to settle for a fixed amount of money that Reebok structured. The pay varied depending on which tiers the fighters fell into. According to a report from Bleacher Report, fighters who had between 1 to 5 UFC fights, received $2,500.

After the culmination of the deal, UFC replaced Reebok with Venum. According to FightBook MMA, the champs and title challengers earn $42,000 and $32,000 respectively per fight. Fighters with 21 and more fights receive $21,000. The following tier is for the fighters who have 16-20 fights in the UFC and they earn $16,000.

Internet currency company Crypto.com is the kit sponsor for the UFC and they signed a deal worth $175 million with UFC for 10 years in 2021. But they pay a certain percentage to fighters in the form of a post-fight bonus depending on fan votes. According to a report from Yahoo Finance, the bonuses vary from bitcoins worth $30,000, $20,000 and $10,000.

UFC heavyweight champion Francis Ngannou has been the most vocal fighter in the company regarding fighter pay. He previously stated that UFC holds its fighters “in captivity” despite them being independent contractors. Even Luke Rockhold recently stated the company did not take care of him when he needed it the most.

Celebrity boxer Jake Paul used the fighters’ disgruntled nature to target the promotion and Dana White. One of the biggest UFC stars, Nate Diaz has also been vocal about the treatment he received from the promotion over the years. So all-in-all, the biggest MMA promotion in the world has received a lot of criticism for its dealing with the fighters.