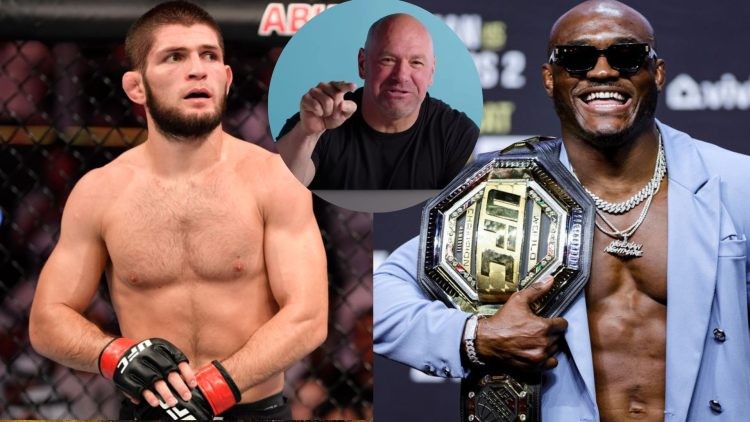 Kamaru Usman is considered the greatest pound-for-pound fighter of all time and with a few more title defenses, he could even surpass the record of Georges St-Pierre.

Recently, the UFC welterweight champion appeared in an interview with ESPN MMA’s Brett Okamoto ahead of his rematch with Leon Edwards at UFC 278 for a title fight.

In this interview, Usman was asked about his verdict on MMA G.O.A.Ts. among other things. Usman surprised everyone with his list of MMA G.O.A.Ts listing Anderson Silva, Jon Jones, GSP, and Dominick Cruz but excluding Khabib Nurmagomedov.

All of the aforementioned athletes – Georges St-Pierre, Anderson Silva, Jon Jones, and Dominick Cruz were dominant champions in their division. They are considered by many as the greatest fighters in their prime.

What’s surprising is that Usman included former bantamweight champion Dominick Cruz in his G.O.A.T. list, who recently came off a brutal KO loss to Marlon Vera on Saturday. But he excluded the former lightweight champion Khabib Nurmagomedov from the G.O.A.T. list. Khabib is known to be the greatest lightweight fighter on the planet.

‘The Eagle’ retired from the sport with an undefeated record of 29-0, including dominant wins over lightweight elites like Conor McGregor, Edson Barboza, Dustin Poirier, and Justin Gaethje.

Nurmagomedov was recently inducted into the UFC Hall of Fame – the most prestigious list for UFC Icons. Dana was questioned about Khabib’s position among the top athletes, to which he replied:

“It’s so hard. Obviously, he is talented enough. You know, who knows what he could accomplish, but he tired too early.”

Nurmagomedov is one of the most accomplished athletes in the UFC. For his achievements, he is sometimes regarded as the best lightweight in the history of the sport. This is due to his unblemished record of 29-0 in UFC, where he never lost a round.

Kamaru is very close to Khabib, so much so that he considers the Russian as his brother, yet did not give him a position of being the greatest.

‘The Nigerian Nightmare’ is the welterweight kingpin and is currently ranked at the top of the pound-for-pound rankings. Being a wrestler, he has improved drastically in striking over the years. Many consider Usman the greatest of all time and often gets referred to as the ‘Modern GSP’ for his dominant fights. With a few more victories on his resume, Usman can achieve the G.O.A.T. status.