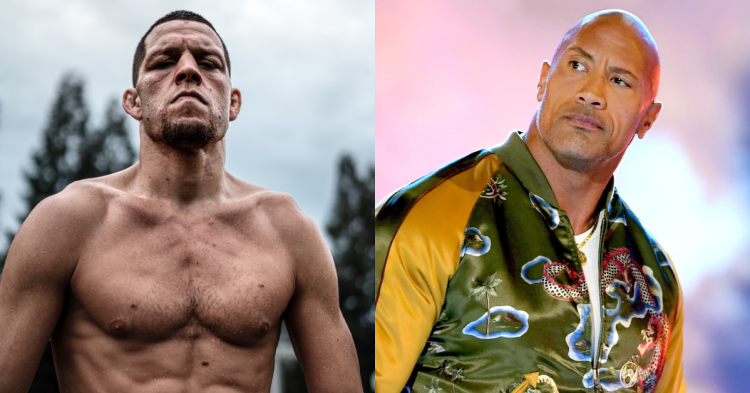 Nate Diaz and his beef with Hollywood’s biggest superstar Dwayne ‘The Rock’ Johnson continue. In a recent tweet, Stockton’s veteran Nate Diaz called out The Rock once again. He wrote “I’m only going to fight the rock, Otherwise I’m good”

Im only going to fight the rock
Otherwise I’m goood

Nate was last seen in the Octagon just a few weeks ago when he fought Tony Ferguson in the main event of UFC 279. He took the fight on just one day’s notice as his previously scheduled opponent Khamzat Chimaev crashed out of the fight after missing weight by a significant margin. In the newly scheduled fight against Ferguson, Nate emerged victorious by submitting Ferguson in the fourth round and thus finishing his contractual obligations with the UFC.

After the fight, when asked about his future Nate expressed his willingness to take over another sport, majorly referring to Boxing. But out of nowhere, Nate has now called out The Rock, does that mean the sport he wanted to take over is Pro Wrestling? Most certainly not. Watching Nate Diaz in the WWE would be the weirdest thing ever. After all, this isn’t the first time we have seen him talk trash about The Rock.

Nate Diaz and The Rock Beef: When did it Start?

Largely going back to The Rock having close links with Jorge “Gamebred” Masvidal. Obviously, both Johnson and Masvidal hail from Miami. The origin of their said rivalry can be traced back to the events of UFC 244.

UFC 244 was Nate’s opportunity to affirm his belief in being the true BMF of the UFC, and he still feels as though the chance to prove that was robbed from him with the doctor’s stoppage that occurred at the beginning of the fourth round. Ever since The Rock presented Masvidal with the BMF belt, Nate has taken real issue with Dwayne.

Speaking after the fight, Nate Diaz playfully scolded The Rock for being there in the first place claiming he favored Masvidal and Mike Tyson is in fact the baddest man on the planet, so he should present the belt. “F** The Rock too man, that motherf***** over here playing me,” Diaz said.

Although The Rock seems to be cool about the whole ‘rivalry’. When once asked about Nate’s comments after UFC 244 The Rock said “I wasn’t surprised at Nate’s comments because that’s the Nate we all know and love,” Johnson said. “He is as advertised. He gets it. He knows that me and Jorge are boys. We’re from Miami, we have a lot of deep connections down there, a lot of the fighters we know, a lot of the coaches and trainers down there, a lot of the gyms we’ve been to. There’s a connection so I was totally fine with it, he gets it.”